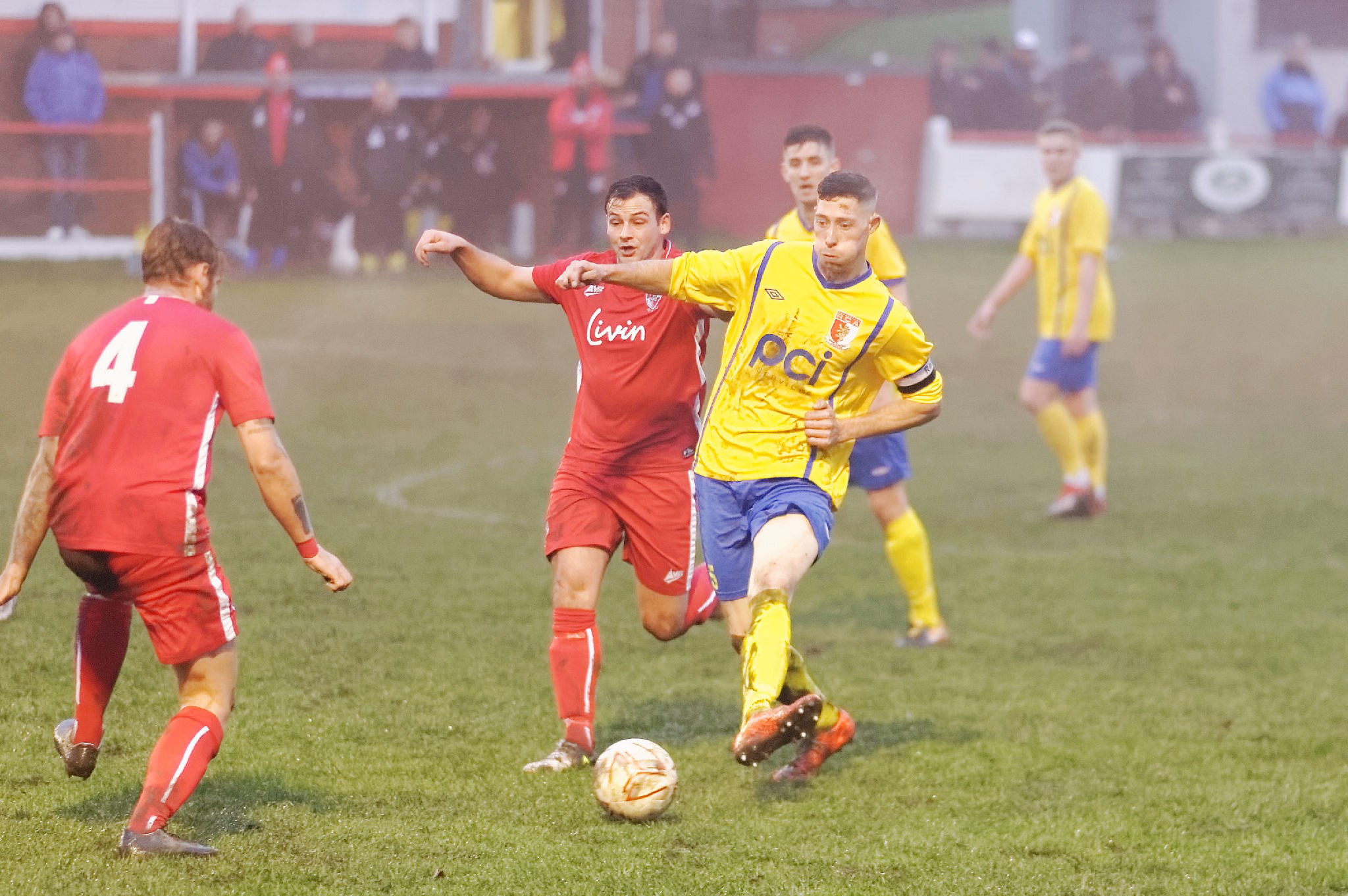 Captain Greg Swansbury on the attack during RCA's terrific Third Round Vase victory at Shildon.

This Saturday, 5 January, is Sunderland RCA’s biggest match of the season so far, as West Auckland Town visit Meadow Park for a Buildbase FA Vase Fourth Round tie - kick-off for this huge game is 3pm.

An intriguing match is in prospect, with West Auckland yet to concede a goal in this season's Vase competition, however, RCA have beaten West twice this season, coming back to win after being a goal down at half-time on both occasions.

RCA entered this season's Vase competition at the First Round stage, after being exempt from the two qualifying rounds for finishing 4th in the league last season. In the First Round, RCA needed extra-time to see off Bridlington Town at Meadow Park. The visitors took an early lead through a fluke goal from captain Andy Norfolk, before RCA took a half-time lead with goals from Colin Larkin and Nathan O'Neill. Bridlington equalised 15 minutes from time through Jake Day, but RCA grabbed the winner with a terrific goal made by Luke Page and finished by Mark Davison.

In the Second Round, RCA travelled to Garstang and got off to a storming start, scoring four goals in the opening 35 minutes, through Luke Page, Nathan O'Neill (2), and Greg Swansbury. Garstang mounted a comeback in the second half after Tom Entwistle scored twice, but late goals from Colin Larkin and Nathan O'Neill, completing his hat-trick, gave RCA a 6-2 victory.

RCA were drawn away to fellow Northern League side Shildon in the Third Round - Shildon took a deserved lead in at half-time through a Daniel “Bobby” Moore strike, but RCA were fired up for the second half and equalised through Luke Page. RCA took the lead with 15 minutes to go, with a close-range shot from Nathan O'Neill, before Aaron Duell equalised with a fine strike from 20 yards. With extra-time looming, RCA grabbed the winner in stoppage time through Kyle Davis, sending the travelling RCA fans and players into raptures!

West Auckland entered at the Second Round stage - after being exempt from the qualifying rounds and the First Round for reaching the Fourth Round last season - and won away at Thackley, with Adam Burnicle grabbing the only goal of the match ten minutes from time. In the Second Round, West were again handed an away tie, this time at Avro, in Oldham, and again left it late with goals from Steven Snaith and Tom Price in the final ten minutes of normal time.

The two sides, of course, need no introduction to one another as far as the league is concerned, having played Northern League Division One fixtures since RCA's promotion from Division Two in 2010. This season, RCA currently sit in 9th place in the table, with 30 points from 20 matches played. West, meanwhile, are 6th, with 33 points, following yesterday's 2-2 draw with Ryhope CW, and having played one match more than RCA.

The FA Vase began with 638 entrants this season, so to make it to the Fourth Round - the last 32 - is a terrific achievement in itself. The winners of the match will receive £1875 from the FA prize fund (losers will receive £625) and will take their place in the Fifth Round, when the draw goes national. The Fifth Round ties are scheduled to be played on Saturday, 2 February.

With Sunderland AFC playing away at Charlton Athletic on Saturday, it's a great chance to come along to Meadow Park for a cracking afternoon of cup football.

Admission to the match is priced at £6 for adults, £4 for concessions, and, as always at RCA, children accompanied by an adult are admitted free.

Come along and support the lads!

Is it not Saturday yet?

It's been a long week, but we're nearly there, Keith!