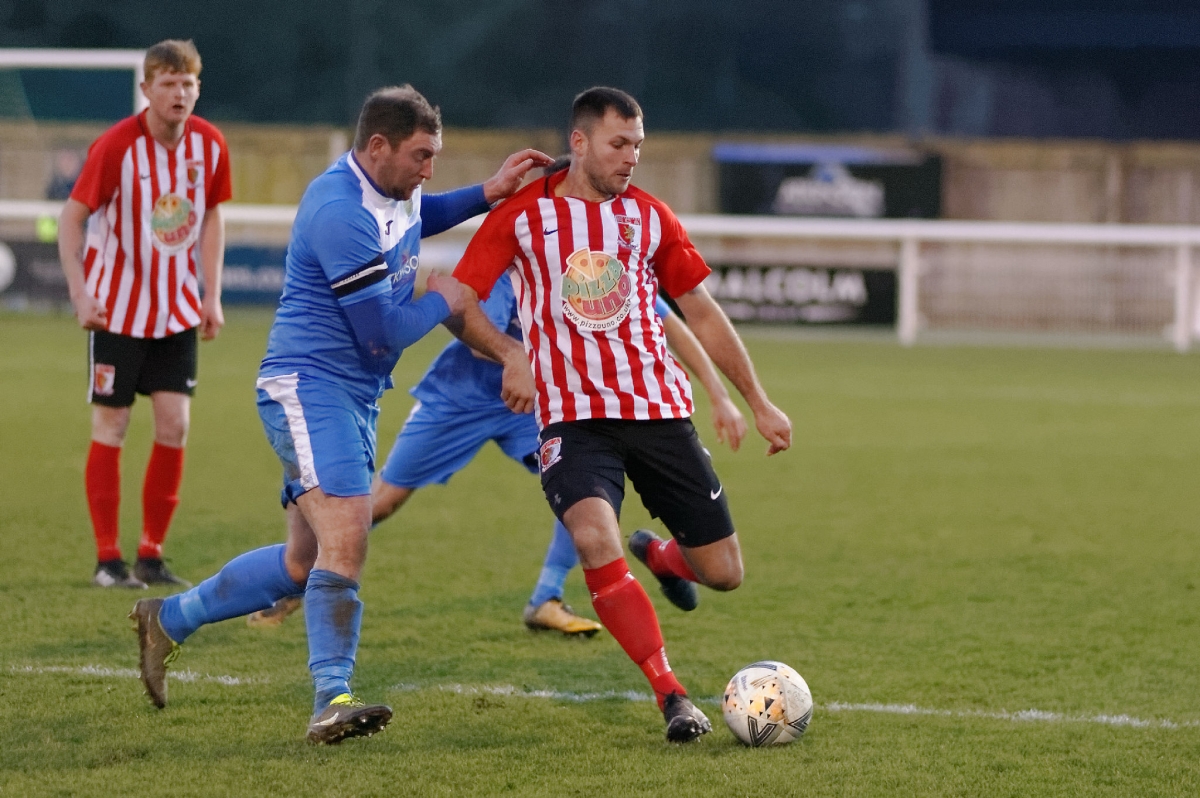 Mark Davison plays the ball down the line during the second half of the match.

Sunderland RCA travelled to bottom of the table Penrith who had only collected two points in their 14 league matches to date.

One change was made to the team that drew with Guisborough town last week with Luke Page replacing Tom McAloon.

Penrith kicked the game off and for the first two minutes retained possession well, however when the initial attack broke down it was RCA who created the first chance of the match with a quick break which saw Charlton drift past the Paul before whipping in a cross which was blocked by Davidson before O’Neill could pounce.

Davison created RCA’s next chance with a delightful though ball toward Larkin but Forrester in the Penrith goal read the situation and intercepted.

RCA were applying a lot of pressure on the Home defence but they were standing firm and clearing their lines effectively, a good ball from Hodgson found Page on the edge of the box but his shot was blocked by Paul and cleared upfiield.

A long ball out of defence gave the home team their first chance of the game in the 15 minute when Shields broke down the right cut inside before crossing into the box where Tsapalis had to save at the near post.

As the game wore on it became very predictable, both teams playing long balls forward which were easily dealt with by defenders or by attackers straying offside.

The game sprang to life again in the 35 minute when Larkin made one of his trade mark foray’s down the left wing before picking our O’Neill whose header looked to have broke the deadlock until the outstretched foot of Hebdon deflected the ball away for a corner.

A the other end a mistake by Tsapalos almost gifted Gardner a goal but the keeper was able to scramble the ball away for a corner. This signaled the start of some home pressure.

Holliday picked up the ball on the half way line, moved forward 10 yards before slipping the ball in to Gardner who controlled the ball well before driving the ball toward goal but Swansbury was able to block the shot and McNab cleared.

A minute later and Tsapalos was called upon to make another save coming out bravely at the feet of Robley. Tsapalos’ clearance was picked up by O’Neill who had beaten the offside trap, however, Forrester was able to make a good save from the RCA striker.

A poor first half ended with a tame freekick by Gardner of Penrith which went straight through the Tsapalos.

The second half got underway with RCA looking to overpower their opponents as they lay siege on the Penriith goal, wave after wave of RCA attacks were repelled by the stout hearted men from Cumbria.

A succession of goal attempts started in the 50 minute when a McNab throw in was moved in field by Page before passing to O’Neill inside the penalty area but he snatched at his shot and it flew wide of the target. Minutes later and a through ball from Jury found Davison who turned and fired in a shot which was well held by Forrester.

In the 59th minute RCA had there best chance of the half when a Cross field ball from Preston found Charlton in space on the right wing he made a bee line for goal before powering in a shot which was blocked by Paul, the rebound fell to O’Neill who fired in a shot at goal and this time it was Davidson who put his body in the way and the ball flew away for a throw in.

RCA made their first substitution bringing on Elliott for the limping Hodgson and it almost had an immediate effect as Elliott played a great ball into the path of Larkin on the left, he crossed into the box where Davison won the header and the ball fell to Page whose shot skimmed the crossbar.

It was all RCA at this point as they went in search of the goal that would seal the points Penrith had spent the first 35 minutes of the second half almost entirely in their own half.

Another period of sustained pressure saw a Larkin shot cleared off the line, then a cross from Larkin on the left was picked up by Charlton on the right his shot flew across the face of the goal with both Davison and O’Neill unable to apply the finishing touch at the far post.

Moan replaced O’Neill in the 80 minute and within a minute had a chance as the ball fell to him inside the area but he was unable to get a shot in as he was closed down by three defenders.

Penrith did have one chance in the second half when Paul relieving the pressure sent a hopeful ball forward, it was collected by Gardner who looked to have time to pick his spot but drove the ball straight at Tsapalos to the relief of the visiting fans.

At the other end again and a shout for a penalty was turned down by the referee when a Penrith player kicked the ball onto his own hand. Some are given this one wasn’t and it looked to be Penrith’s day.

The game ended 0-0 and RCA supporters will be wondering how? Penrith will reflect on the one chance that they had in the second half but will be by far the happier of the two teams.

Penrith defended in numbers and RCA found it difficult to break down such stubborn resistance. Continually playing high balls forward was not the answer in this game where the best success came when the ball was played wide and the ball was moved along the ground at pace.

Next up for RCA is the little matter of the FA Vase 3rd Round tie away to Shildon on Saturday, 1 December with a 3.00pm kick off.