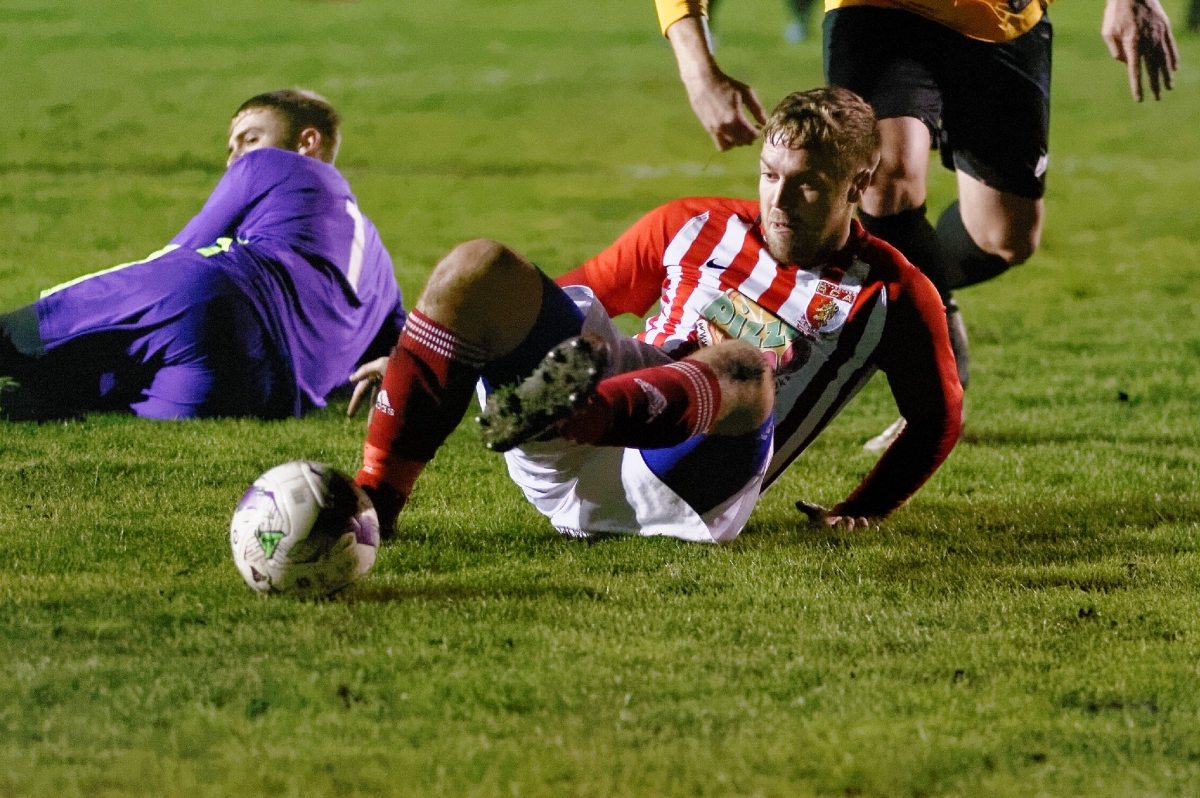 Sunderland RCA travelled to Crook Town this evening for a Second Round tie in the Brooks Mileson Memorial League Cup.

RCA made three changes to the side that lost narrowly to North Shields on Saturday - Kyle Davis, Dylan Elliott and Thomas McAloon replaced Ross McNab, Dominic Moan and Craig Hodgson, with the evergreen and ever-versatile Colin Larkin slotting in at left-back.

RCA got the match off to a positive start, forcing a corner in the opening five minutes which was headed narrowly wide by Davison at the far post. Davison, however, wasn't to be denied, as he gave RCA the lead in the seventh minute: McAloon - making his full debut - split the Crook Town defence with a perfectly weighted ball forward, and Davison advanced to the edge of the penalty area before confidently slotting the ball past Makepeace. Eight minutes later and RCA doubled the lead as a ball was crossed in from the right and Charlton challenged Makepeace. With both players on the deck, the loose ball fell kindly for Charlton, who reacted quickly to guide the ball into the net from eight yards.

On the half hour mark, RCA forced a corner down the left, which was half cleared and volleyed over the crossbar by O'Neill from the edge of the penalty area. One minute later, RCA’s dominance was rewarded with a third goal - Kyle Davis, on the left, played a neat ball into McAloon, who drove into the penalty area before firing in a shot that Makepeace did well to parry, but the loose ball fell to Preston, who guided the ball home. In the 32nd minute, the home side had their first meaningful attempt on goal as a good ball was played up to Caley, who advanced to the edge of the RCA penalty area but scuffed his shot across goal and wide of the far post.

During the interval, RCA made a first substitution, with Sam Lilley replacing Clayton Davis.

Six minutes into the second half and McAloon made a good run down the left before crossing low to Charlton, whose shot produced a terrific save from Makepeace, diving to his left. Two minutes later and Crook reduced the deficit - a corner on the right was delivered to the far post, where Husband rose with a towering header into the top corner. Any thoughts of a Crook comeback, however, were quashed four minutes later when RCA restored the three-goal lead - O'Neill did well to win back possession for RCA in midfield, before playing the ball out to McAloon on the left. McAloon crossed low along the six-yard line where Gaston looked to clear the ball, but, instead, sliced the ball which flew high and quickly past the unsuspecting Makepeace.

RCA continued to dominate and, on the hour mark, Davison fired a cross over the crossbar. In the 63rd minute, Verity made a good run down the right touchline, before crossing into the RCA penalty area, where Hume's low shot was comfortably held by Tsapalos. As the match entered the final 15 minutes, Andreas Kokoska replaced Dimitri Tsapalos in the RCA goal. One minute later and RCA scored a fifth goal as Davison headed home a cross from the right. In the 81st minute RCA made a final substitution, with John Jury replacing Dylan Elliott. In stoppage time, RCA grabbed a sixth goal after a Davison free-kick stuck the crossbar and Charlton was on hand to knock in the rebound for his second goal of the match.

A very good win for RCA tonight which takes us through to the last 16 of the Brooks Mileson Memorial League Cup.

Next up for RCA is a first home league match since 2 October, when Guisborough Town are the visitors to Meadow Park this Saturday, 17 November, with a 3pm kick-off.