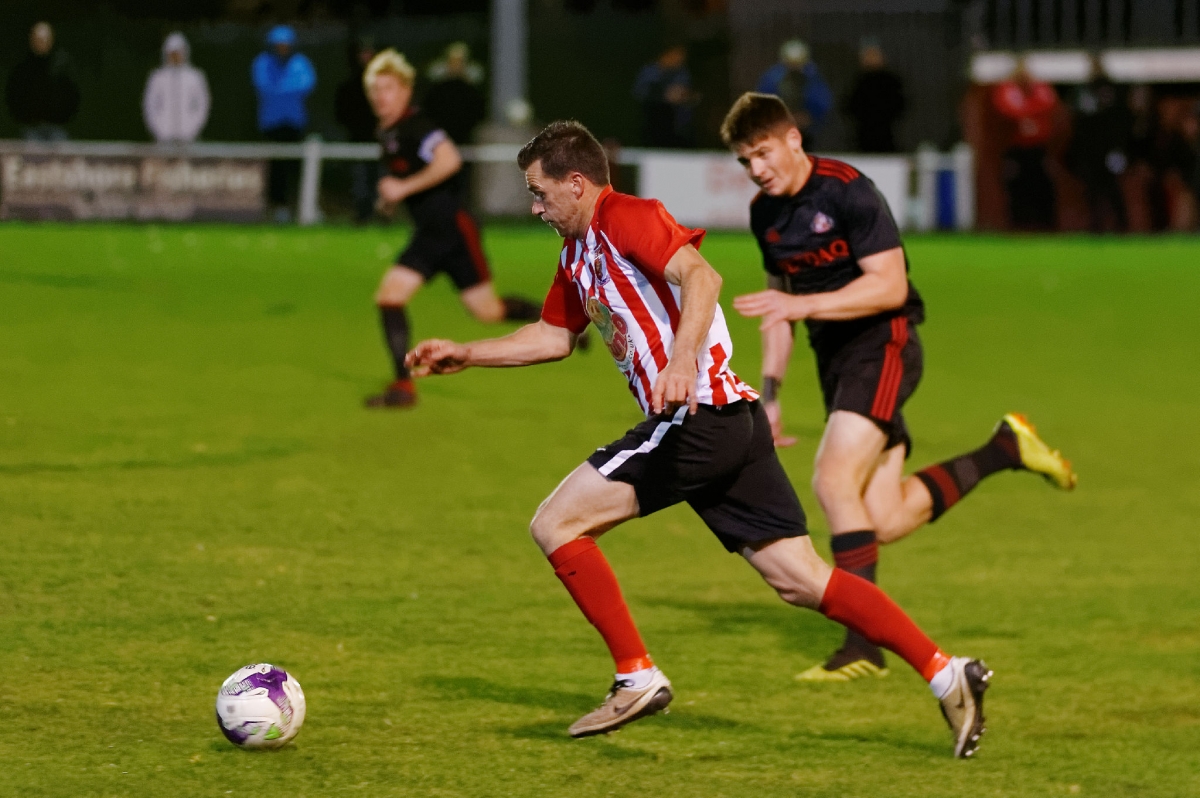 RCA made three changes to the side which drew, 2-2, with Consett on Saturday - in came John Jury, Dominic Moan and Mark Davison, for Sam Lilley, Dylan Elliott and Michael Charlton. Recent signing Thomas McAloon took a place on the bench.

On another blustery night, it was the visitors who made the better start, and took the lead in the eighth minute - Brotherton was released in on goal and was tripped by Tsapalos. The ball ended up in the net, but the referee had already blown for a penalty kick. Connelly smashed the penalty into the top corner, giving Tsapalos no chance. Four minutes later and RCA had a half chance to equalise as a free-kick on the halfway line was whipped in by McNab, and Preston flicked the ball narrowly wide. In the 14th minute, RCA produced a good move down the left, with a neat exchange of passes involving Larkin, O'Neill and then Moan driving to the byline and winning a corner. McNab’s corner was headed up into the air by O'Neill and was claimed by Patterson in the Sunderland goal. Two minutes later, and Connelly made a good run down the right, driving into the RCA penalty area and winning a corner. From the corner, the ball was headed behind for a subsequent corner on the far side, that was whipped in low to the front post and cleared by Swansbury.

In the 28th minute, RCA equalised - a free-kick on the right was delivered into the penalty area by McNab, and O'Neill saw his header well saved by Patterson, but Swansbury was on hand to apply the finishing touch to the loose ball from almost on the goal line. Three minutes later and RCA had another good opportunity from a set-piece, as McNab again delivered a dangerous free-kick into the Sunderland penalty area and Preston and Davison both slid in at the far post, with the ball hitting the side netting. With seven minutes remaining in the first half, RCA were awarded a free-kick 25 yards from goal after O'Neill was tripped driving in on goal. Davison struck the free-kick low and wide of the post. In the 40th minute, Sunderland won a corner on the right, which was delivered into the RCA penalty area and Young glanced a header wide of the far post. In the final action of the first half, Larkin made a good run down the left before crossing to O'Neill, whose header was comfortably held by Patterson.

RCA, now kicking down the slope and with the wind, began the second half on the attack, and, six minutes in, Davison received a good ball and forced a corner. McNab’s corner caught the wind and was drifting into the top corner, but Patterson did well to claim the ball under the crossbar. Two minutes later, and McNab was again in the action, picking up a loose ball that had been cleared and firing in a shot from 25 yards which cleared the crossbar. Barely a minute later and Sunderland launched a slick counterattack, as Kokolo raced clear and advanced into the RCA penalty area, but Tsapalos made a good block. The loose ball fell to Connelly, whose shot was also blocked, this time with a terrific sliding challenge from Preston. On the hour mark, a ball was played out to Young, whose shot from the edge of the RCA penalty area was comfortably held by Tsapalos.

Five minutes later and RCA were awarded a free-kick on the right which was delivered into the penalty area by McNab, where Page headed the ball narrowly wide at the far post. In the 70th minute RCA took the lead - Page was tripped driving into the Sunderland penalty area and the referee pointed to the spot. Larkin's penalty kick was unstoppable, flying into the top corner. Three minutes later and it was almost a third goal for RCA as McNab’s corner was headed towards the bottom corner by Page, but was cleared off the line, and Swansbury’s overhead kick from the loose ball drifted narrowly over the crossbar. With seven minutes remaining, the impressive McNab won back possession for RCA down the left, before delivering a terrific cross to the far post, where Moan headed wide. Seconds later, and Moan turned provider, crossing from the right for Davison to head wide. In stoppage time, RCA created two further opportunities - first, a free-kick was drifted wide by McNab from 25 yards. Then, Moan produced a terrific save from Patterson, tipping a fierce shot onto the crossbar.

A strong and impressive performance from RCA tonight, particularly in the second half, with plenty of chances created to add to the scoreline.

RCA now have a nice little five-match unbeaten run going, and will be looking to extend it still further in the League Cup and FA Vase matches coming up.

Next up for RCA is an away day at Garstang in the FA Vase Second Round on Saturday, 3 November. Kick-off is at 3pm.