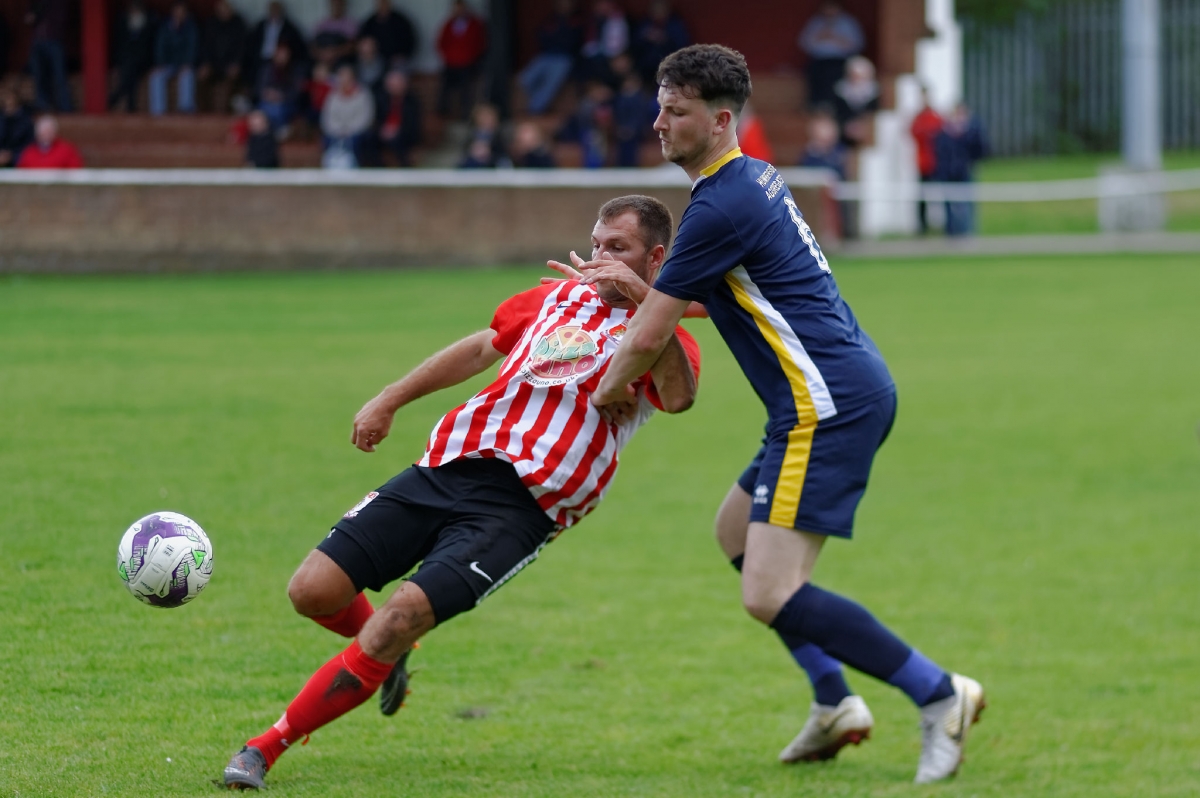 For Mike Roe's photos from the match please click here.

RCA made two changes to the side which won at Bishop Auckland last Saturday - Sam Lilley returned at right back in place of John Jury, and Luke Page was back in the starting line-up for Dominic Moan, who took a place on the bench.

The opening exchanges produced little by way of goal scoring opportunities, as both sides tried to get to grips with the strong wind blowing down and across the pitch. In the 13th minute, the visitors took the lead with a goal out of nothing - Norfolk received the ball on the left, just inside the RCA half and looked to play in a deep cross, but the ball caught the wind and sailed over the backpedaling Tsapalos and into the net. Two minutes later and RCA had a good chance to make a rapid response as Elliott whipped in a free-kick from midway inside the Bridlington half that was headed over the crossbar by Swansbury at the far post.

In the 28th minute, RCA equalised as Elliott, in central midfield, released Page through the inside right channel, and Page drove into the Bridlington penalty area and was tripped by Norfolk and the referee pointed to the spot. Larkin coolly slotted away the penalty kick. Just three minutes later, and RCA took the lead - Page made a typical driving run down the right, before cutting in along the byline and crossing low and O'Neill was on hand to slide the ball into the net from a couple of yards.

RCA were now in the ascendancy, and in the 36th minute could have extended the lead as Larkin played a lovely reverse pass into the path of Charlton, who raced into the penalty area, but Jackson was quick off his line to bravely dive at Charlton's feet and smother the ball. Three minutes later and Larkin was again in the action, twisting and turning on the right side of the Bridlington penalty area, before firing in a low shot across goal which flew narrowly wide of the far post.

Eight minutes into the second half, and RCA were awarded a free-kick for a foul on O'Neill 25 yards from goal. Elliott's free-kick clipped the wall before going out for a corner which was cleared. In the 59th minute, a long ball forward was headed wide by O'Neill at full stretch. RCA kept creating chances, and, six minutes later, Page fired in a fierce shot which produced a terrific save from Jackson. Four minutes later and RCA made their first substitution, with Dominic Moan replacing Michael Charlton. In the 73rd minute, Bridlington substitute, Day - the man who had got the winner in the previous round against Consett - fired in a shot from the edge of the penalty area that was just over the crossbar.

Barely a minute later and RCA had another great chance to wrap up the match as Elliott played a delightful one-two with O'Neill before advancing into the penalty area but fired his shot agonisingly wide. Two minutes later and RCA were punished for missed chances as Bridlington equalised after a free-kick from the halfway line was half-cleared and Day fired in a lovely half-volley from the edge of the RCA penalty area that rocketed into the corner of the net. One minute later and Mark Davison replaced Nathan O'Neill.

In the 83rd minute, RCA were awarded a second penalty kick of the match after Davison flicked a throw-in onto Page in the six-yard area, Page was impeded and the referee again pointed to the spot. Larkin once more stepped up to take the penalty kick, but this time Jackson produced a good block and Larkin got underneath the rebound to lift the ball over the crossbar. What drama! In the final minutes of normal time, McNab whipped in a dangerous, low free-kick which Jackson did well to hold under pressure.

It was the visitors, once again kicking down the slope and with the wind at their backs, who got extra-time off to a strong start, with Modest firing in a powerful shot from the edge of the penalty area that was well saved by Tsapalos. In the 12th minute of extra-time, Bridlington were awarded a free-kick after a foul on Dennison by Swansbury. Day drove the free-kick in low, and the ball took a deflection off the RCA wall before clipping the outside of the post for a corner which was cleared by the head of Swansbury. In the final minute of the first half of extra-time, Page made a good run through central midfield before playing the ball out to Moan on the left, whose shot was dragged wide of the far post.

Five minutes into the second half of extra-time and the visitors were close to retaking the lead as a ball was crossed in from the left and was flicked on at the front post by Norfolk, who saw his effort skim the far post and go out for a goal-kick. Two minutes later and RCA made their final two substitutions, with James Armstrong and Kyle Davis replacing Dylan Elliott and Craig Hodgson.

With five minutes remaining, and a replay looking increasingly likely, RCA grabbed the winner - Page capped an outstanding performance by making another fantastic run down the right, evading a couple of challenges, before driving towards the byline and cutting the ball into the six-yard area, where Davison swivelled and volleyed the ball into the far corner for a superbly worked and finished goal to win the match.

A terrific win for RCA this afternoon (by the same scoreline as three years ago!) against a strong Bridlington Town side. The wind didn't help either side to play football, but both deserve great credit for producing a highly entertaining match in extremely difficult conditions.

RCA can now look forward to Monday's Second Round draw with relish - the tie is scheduled to be played on Saturday, 3 November.

Next up for RCA is a trip to league leaders Consett on Saturday, 20 October, with a 3pm kick-off.

Mike Roe has another photoset at

For some reason that link

For some reason that link hasn't pasted properly, better to copy and paste the complete url into your browser