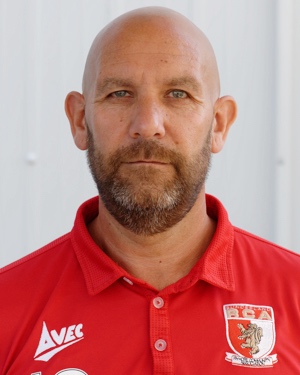 I’d just like to start by wishing Lenny a speedy recovery from his heart attack last week, not just from me, but from everyone connected with the club. Also a special mention to our Physio Rachel Davison, who did a great a job in looking after Lenny while waiting on the ambulance. I’d also like to thank everyone for welcoming me to the club since taking over Stevie’s role at the beginning of the season. It’s a learning curve for me, but one I’m really enjoying and I've got a great set of lads to work with.

So, we didn’t have the best of starts on Saturday against Newcastle Benfield on the opening day of the new season. After going in at half time 0-0 and having most of the possession, I thought we could go on to win it. They got their goal early in the second half and we didn’t really recover from it and at times we tried to rush the play looking for an equaliser.

We had a good opportunity to put this right on Wednesday when we went up to face newly promoted Whickham and got a great response from the lads. We had to work hard as Whickham tried to stop us from playing, but after taking control of the game and showing our quality, we came away with all three points. Good to see Stevie Callen get two goals and Adzey get on the score sheet - but Pagey is adamant it’s his goal! A well deserved clean sheet to go with a well deserved win.

So Saturday comes and we welcome our neighbours Ryhope CW in The Emirates FA Cup. There’s obviously a lot of connections with management and players, but it’s also a great advert, not only for Ryhope, but for the whole of Sunderland. Local and national press, television cameras and crews gives both sides a chance to promote the great standard of football available in the area.

It’s also a huge game, for both sides, not only in terms of being a derby, but also the financial incentives that are on offer in the prize fund, which helps massively in the running of any club. I’m sure the management team at RCW will have their players right up for this game, but we’ve got to go into the game prepared, organised and work hard for each other, which was key to us finishing fourth last season. Anything can happen in the Cup, but let’s just take each game as it comes, work hard, stick together and get that all important win.

I’m sure Keith Stoker is hoping for a Ryhope win.