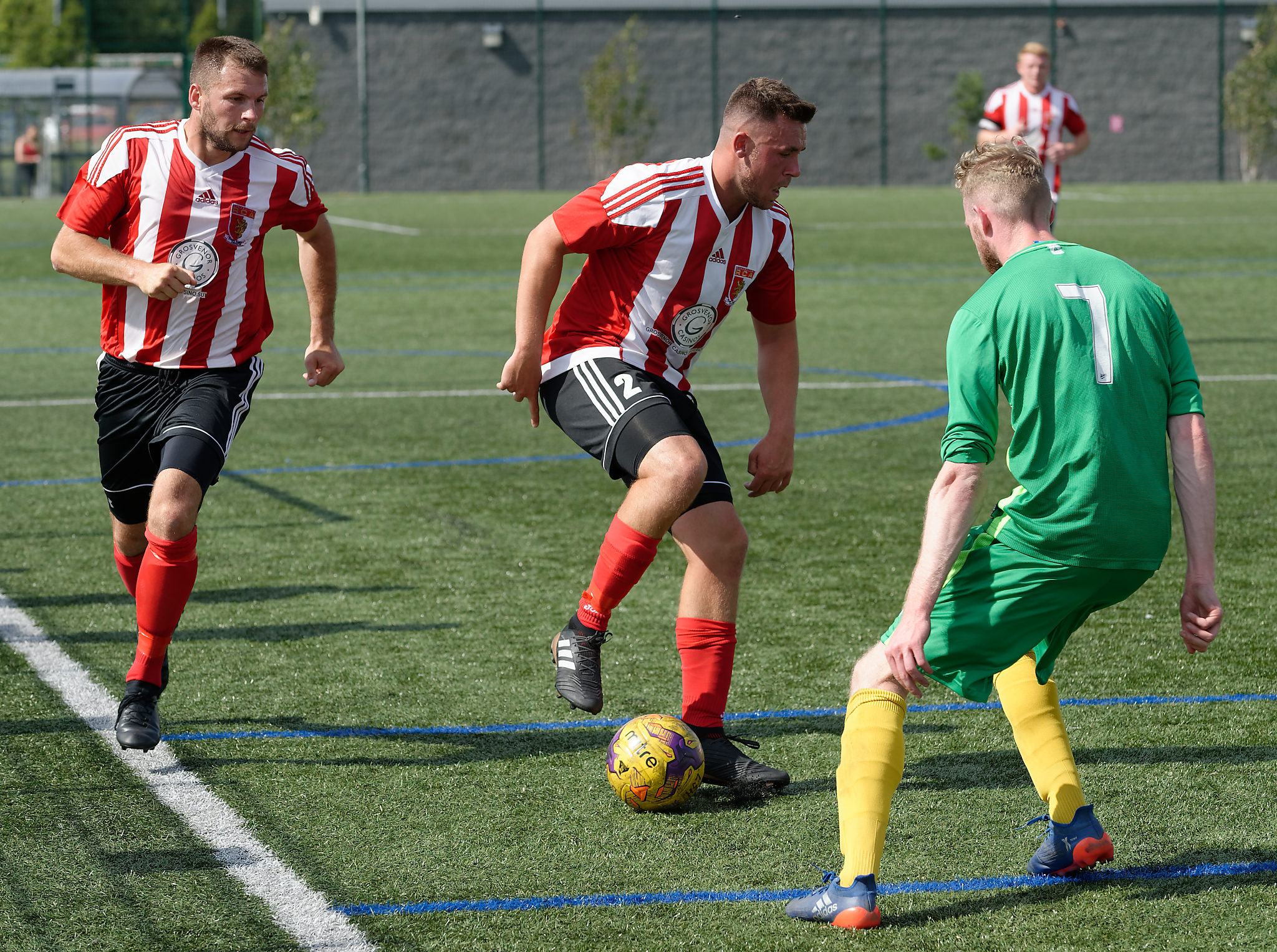 Luke Richardson weighs up his options as Mark Davison overlaps in the second half of the match.

In weather as absurd for football as it was for Stanley, RCA took on Esh Winning in their third pre-season friendly, on the 4G playing surface at North Durham Academy. Foreign holidays, the Durham Miners Gala, England and Belgium vying for third place in the World Cup and an emergency hospital admission meant RCA's squad and coaching presence were thin. So: fair play to those who turned out for a match that lacked the glamour of last Thursday, but was nonetheless an important step to match readiness for the season kick off on Saturday, 4 August at home to Newcastle Benfield. It also extended new Assistant Manager Mark Cowan's 100% record! For Saturday's match Mark was assisted by Peter Elliott.

The match kicked off five minutes early, which meant Graham, John and I, returning from East Stanley WMC, missed Luke Page's opener on three minutes. On 21 minutes a goal bound Dylan Elliott free kick from a central position outside the penalty area was turned away by the Esh Winning keeper, Mark Fish, jumping to his top left corner. On 27 minutes, the Esh Winning keeper was left stranded for Mark Davison to pass the ball into an empty net. On 36 minutes, Luke Page got his second with a far post finish. At the end of the first half a Stephen Callen cross after leaving the keeper stranded made for an easy second for Mark Davison.

Three minutes into the second half, Davison put the ball between the keeper's legs to score his third. Ten minutes later the ever lively Clayton Davis was put through to run on goal and score with a good finish. Ten minutes further on and Clayton turned provider, crossing for Scott Pocklington - yes, you read that right - to score. Next on the score sheet was Michael Charlton who headed home. On 80 minutes, Mark Davison got his fourth, hitting home a Dimitri Limbo cross.

Shortly after RCA's ninth goal, there was a clash of heads which led to lengthy treatment for Esh Winning's Jonathan Swift from RCA physio, Rachel Davison. The referee then blew to bring the match to an early end. We have now heard that Jonathan is OK, but needed six stitches. We wish him well. We also thank Esh Winning for the game and wish them well for the coming season.

Next up is a newly arranged match against North Alliance side AFC Killingworth on Thursday, 19 July, 7:30 kick off, at Meadow Park. This match was arranged because of the cancellation of the Boldon CA game.