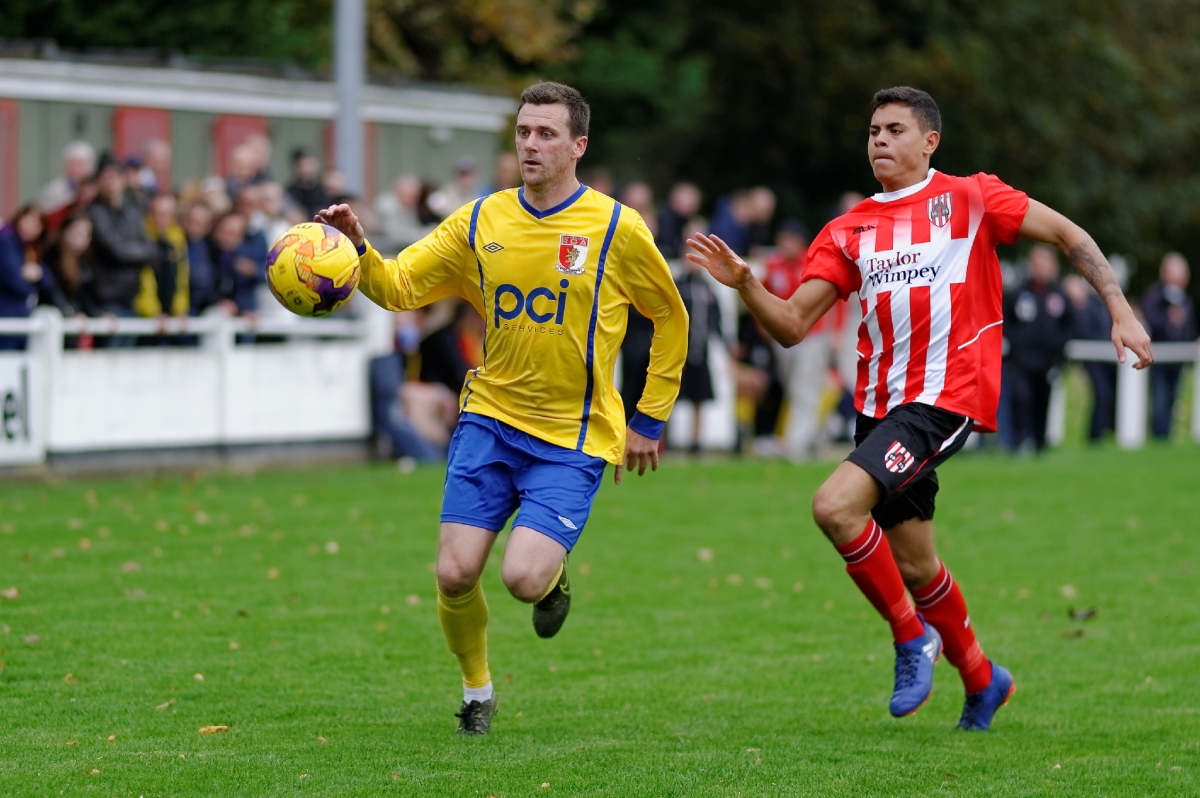 Colin Larkin grabbed a brace for RCA with some terrific finishing.

Sunderland RCA made the trip down the A19 for today's Northern League match with Guisborough Town.

For the first time this season RCA named an unchanged side - with the same XI starting as did in last Saturday's 4-0 victory over Billingham Synthonia.

Guisborough got off to a strong start and, five minutes in, former RCA captain Brian Close controlled a forward pass but fired his shot wide from 25 yards. Two minutes later and Guisborough had three chances to open the scoring - a good ball over the RCA back line was picked up by McNeill, who fired in a shot that was superbly blocked by Bussey. The loose ball was picked up by Hugill, who, from the edge of the penalty area, fired in a second shot that was again brilliantly blocked by Bussey. Amazingly, the loose ball fell again to Hugill, who fired in a third effort and Bussey again blocked the attempt. Three terrific saves in ten seconds, all of which denied a certain goal - great goalkeeping. In the 11th minute, Elliott played a lovely ball out to Larkin on the right - Larkin crossed low to the front post where O'Neill, stretching, was only able to get a toe on the ball and it was gathered by Nixon. Two minutes later and RCA had the lead - O'Neill was fouled midway inside the Guisborough half and from McGuinness’ free-kick, Nixon came to punch clear and the ball dropped to O'Neill, who volleyed through a crowded six-yard area and into the net. Two minutes later and RCA forced a corner which was half cleared to Larkin on the left side of the penalty area, who stood up a cross which was headed clear to Elliott who fired in a fierce volley which was deflected behind for a corner which was cleared.

There then followed a quiet spell before the match burst into life in the 29th minute when Guisborough equalised - a ball was played in from the right and a Guisborough player and Preston tangled and the referee pointed to the spot. Maloney drove the penalty home. Two minutes later and Guisborough took the lead as a good ball over the top was picked up by McNeill, who drove into the penalty area and coolly slotted the ball past Bussey. It only took RCA two minutes to restore parity as Cassidy crossed from the right and Page played a neat little through ball to Larkin who finished clinically from eight yards. In the 41st minute, Guisborough retook the lead - Roberts picked up a through ball from Hugill, cut inside, and fired in a beauty from 25 yards. Incredibly, RCA still had time in the first half to equalise - in stoppage time, Larkin crossed from the right, and O'Neill chested the ball down and half-volleyed into the top corner with a super finish.

An amazing end to the first half with five goals in just over fifteen minutes. Great entertainment for fans, but a period of play that probably left both managers tearing their hair out!

At half-time, RCA made a substitution, with Stephen Callen replacing James Cassidy.

The second half was only a few seconds old and Guisborough missed a great chance to retake the lead as a cross from the right was headed wide by substitute Steel. One minute later and it was RCA who retook the lead - a Bussey goal-kick was flicked on by O'Neill and Larkin drove into the penalty area before superbly lifting the ball over Nixon from a tricky angle - a class finish from a class footballer. In the 58th minute, RCA won a corner from which O'Neill fired in an effort that was blocked for a second corner which was cleared. Two minutes later and Guisborough won a free-kick after a foul by Elliott - Maloney curled the free-kick over the crossbar from 25 yards. And four minutes later another Guisborough free-kick was flicked over the crossbar at the front post.

As the match entered the final 20 minutes, Larkin fired in a shot from a tight angle on the right which was blocked by Nixon, and from the loose ball, O'Neill's follow-up effort was also blocked. In the 71st minute, Steel had another good chance to equalise, again heading wide from a cross from the right. Five minutes later and RCA produced a good move as Larkin made a driving run down the right before playing in Charlton but his cross was cleared. One minute later and Larkin was put clean through from a super pass by Elliott, but Larkin's effort was well blocked by the advancing Nixon. And a further minute later, Elliott made a good run through central midfield before being tripped 25 yards from goal. Elliott picked himself up and curled the free-kick over the Guisborough wall, but Nixon was again on hand to make the save. In the 80th minute, Guisborough won a corner on the right which was punched up into the air by Bussey, who then punched again and RCA launched a slick counterattack as McGuinness played the ball up to Callen on the left and on the halfway line. Callen controlled the ball, turned and played in Larkin, who raced onto the through ball, but fired over the crossbar from 25 yards. Five minutes later, and with the home side pushing for an equaliser, RCA broke well again as Charlton made a super run down the right before crossing to Larkin, who fired over the crossbar from 12 yards.

Back-to-back wins for RCA scoring four goals in both matches. As the pre-match build-up suggested, recent fixtures between the two sides have produced entertaining matches with plenty of goals, and today was no exception.

RCA move up to eighth position in the league table and join local rivals Seaham Red Star and Ryhope Colliery Welfare on 22 points from 13 matches played.

This afternoon's RCA man of the match was chosen by Dan Cowan. Dan picked Colin Larkin for his “two goals and excellent all round performance”. Well played, Colin.

RCA are back in action on Tuesday, 17 October, when Dunston UTS are the visitors to Meadow Park. Kick-off: 7:30pm.