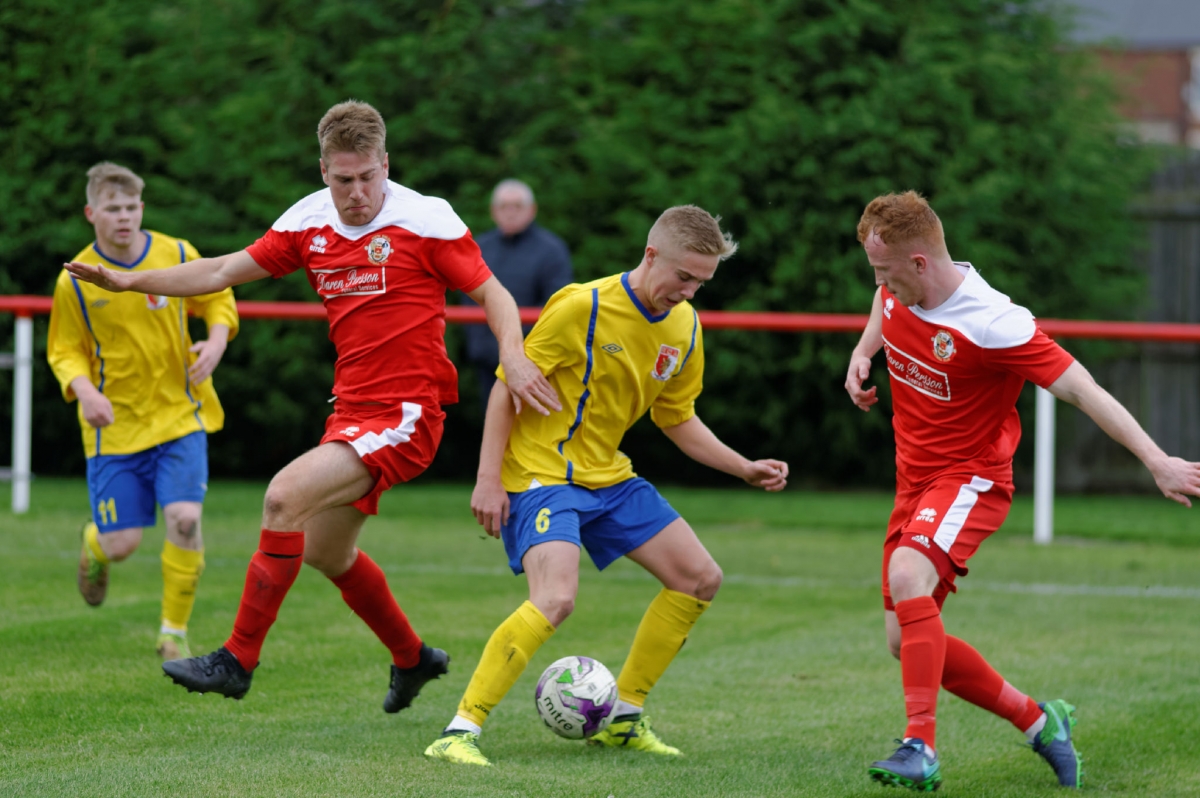 Dylan Elliott on the ball for RCA.

For North Shields' video of the match please click here.

Sunderland RCA made the trip to North Shields for today's Northern League match.

RCA made four changes to the side that lost to Shildon last Saturday - in came recent signing Keith Finch in goal, recalled Brad Wilson, Ross Preston, who captained the side, and Jonathan Davis, replacing Neal Bussey, Clayton Davis, Nathan O'Neill and Adam McGuinness, who was serving a one-match suspension.

It was the home side that had the first chance of the match after five minutes as Carr made a run through central midfield and fired in a shot that was tipped over the crossbar by Finch. Four minutes later and Charlton forced a corner after a good run down the right. From Elliott's corner, the ball dropped just in front of Charlton and was held by Hayes. One minute later and Mason crossed and the ball was sliced behind for a corner which was cleared. Midway through the first half and Wilson fired in a shot from the edge of the penalty area which was deflected wide for a corner which was cleared. In the 29th minute, Elliott swept a lovely ball out wide to Charlton who was fouled, and the subsequent free-kick was cleared. Two minutes later and Holmes made a driving run into the penalty area but his shot was tame and comfortably held by Finch. Two minutes later and Shields were unlucky not to take the lead - a ball in from the left was fired off the post by Bainbridge and the rebound was hacked clear for a corner which, in turn, was cleared. In the 36th minute, Holmes made a good run down the left and crossed to Bainbridge who headed over the crossbar. Three minutes later and Shields had the lead - Holmes again made a driving run into the penalty area and was fouled by Noble. The referee pointed to the spot, and Bainbridge made no mistake.

Four minutes into the second half and RCA were two down - Holmes crossed from the left and Finch couldn't hold the ball and it dropped to Ormston, who slammed the ball into the net from close range, leaving RCA with a mountain to climb. In the 57th minute, Holmes was through on goal but his shot was straight at Finch. Four minutes later and Mason played the ball to Bainbridge who fired a shot wide from the edge of the penalty area. Two minutes later, Davis played a good ball out to Charlton whose cross from the right was cleared. And one minute later RCA won a free-kick for a foul on Davis but Elliott's free-kick was fired over the crossbar.

Midway through the second half and Shields hit the woodwork again - a ball in from the right was fired off the face of the crossbar by Mason and the rebound was cleared. In the 72nd minute, Cassidy made a good run and cross from the right but Charlton's header was saved by Hayes. Five minutes later and RCA won a free-kick for a foul on Davis. Elliott's free-kick was cleared by Pell for a corner. From the corner the ball was half cleared to Preston, who fired a shot over the crossbar from the right side of the penalty area. With five minutes remaining, Davis delivered a good cross from the right which was ballooned over the crossbar by Charlton. In the final minute of normal time, Holmes made another super run down the left and fired a shot right across the face of goal. In stoppage time, RCA produced a good move as Elliott released Charlton in on goal but the shot was poked narrowly wide from six yards.

A tough time for RCA right now - five defeats in a row and just one goal scored in those five matches. Without a recognised centre forward on the pitch today to put away the chances, particularly in the second half, it was always going to be difficult to get anything from the match.

For the first time this season, RCA have a full week off which will hopefully give the lads a chance to recover from an extremely demanding opening eight weeks which has seen 11 league and five FA Cup matches played.

Next up for RCA is a home match against Billingham Synthonia at Meadow Park on Saturday, 7 October. Kick-off 3pm. Hope to see you there.