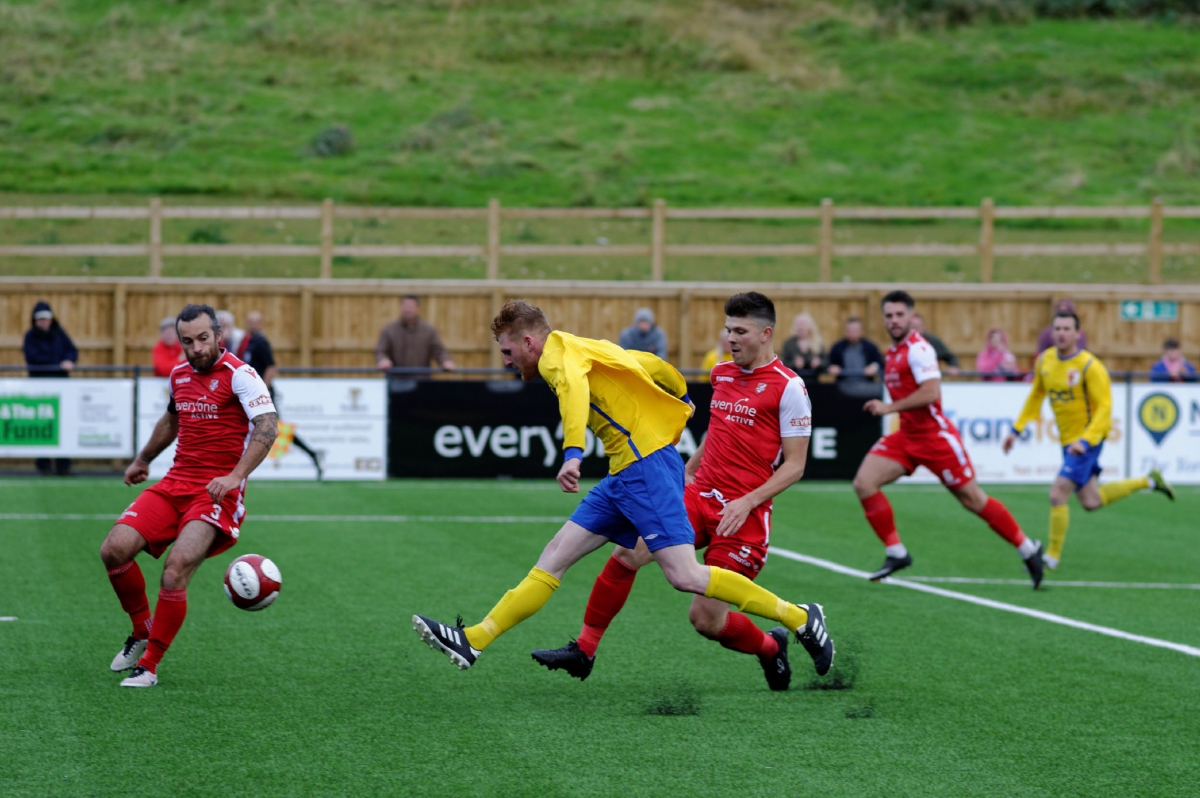 Luke Page fires in a second half shot.

9:36pm, Tuesday, 5 September - the final whistle blows at Clayborn to bring to a close a superb performance from Sunderland RCA and a 4-0 win against Liversedge in the Emirates FA Cup First Qualifying Round tie, setting up this afternoon's Second Qualifying Round visit to Scarborough Athletic.

Following the six changes for the midweek defeat by Stockton Town, RCA reverted back to the same XI that started the match against Billingham Synthonia last Saturday.

It was RCA who had the first attempt of the match - in the third minute, Charlton found space in the Scarborough penalty area but fired his shot high over the crossbar. And three minutes later Larkin fired a shot wide of the post as RCA made a good start. In the 13th minute a long ball forward was controlled by Callen, who drove to the byline and crossed but O'Neill headed the ball wide at the front post. Two minutes later and RCA won a free-kick midway inside the Scarborough half - McGuinness’ free-kick fell to O'Neill, whose shot on the turn was blocked and Larkin fired the loose ball over the crossbar. In the 17th minute Wright pinched the ball off the toes of Callen before driving into the penalty area and squaring the ball to Sinclair, whose effort was scuffed wide. Three minutes later and Scarborough had another chance as Thirkell released Sinclair who fired a shot wide.

In the 24th minute, RCA had their best chance of the half to open the scoring - good, determined play by Charlton down the right forced a corner. From McGuinness’ corner Callen rose well to head the ball narrowly over the crossbar from close range. Scarborough then had a good spell of pressure, with a shot wide from Coulson in the 26th minute. With six minutes to half-time, Page made a good run through central midfield before playing the ball out to Charlton on the right, whose cross was side footed well wide from the edge of the penalty area by O'Neill. One minute later and Scarborough had their best chance of the first half as Coulson delivered a lovely cross from the left and Sinclair sent a glancing header wide of the post from close range.

It was a fired-up Scarborough that emerged for the second half and immediately created a chance as Wright crossed from the right, the ball was cleared back to Wright, whose second cross was fired over the crossbar by Coulson. In the 50th minute, good play down the Scarborough left resulted in a shot from 25 yards by Merris flying a yard over the crossbar. Four minutes later and Merris delivered a good cross from the left that was palmed away by Bussey at full stretch to set up a swift counterattack for RCA, as Larkin released Page in on goal but his shot on the run was straight at Taylor. Two minutes later and Scarborough took full advantage of RCA's missed chance to open the scoring - a back-pass to Bussey was mis-kicked straight to Sinclair, who squared the ball to Coulson who made no mistake from inside the penalty area. In the 58th minute, Callen made a good run down the left before crossing into the six-yard area but the ball hacked clear, with O'Neill sliding in. Three minutes later and a good move by Scarborough as Merris made a driving run down the left and crossed to Dean, whose shot was well blocked by Swansbury for a corner which was cleared. And a further three minutes on and RCA won a free-kick for a foul on Charlton - McGuinness’ free-kick bobbled around briefly before Callen latched onto the loose ball and fired on a shot that was saved by Taylor, diving to his right.

Midway through the second half and RCA won a free-kick for a foul on O'Neill which was punched clear by Taylor. Three minutes later and RCA were unlucky not to equalise - RCA were awarded a free-kick for a foul on Callen. Elliott's free-kick was cleared for a corner which, in turn, was headed behind for a second corner. Elliott whipped the ball into the six-yard area where Preston headed a goal bound effort which was blocked by Thirkell. The loose ball came back to Preston who fired in a shot that was again blocked by Thirkell. In the 73rd minute, and with RCA pressing for an equaliser, Callen fired in a shot straight at Taylor. Eight minutes later and it was RCA who had a narrow escape after Hewitt sent a looping header over Bussey but Larkin was on the goal line to hook the ball clear. In the 83rd minute, Scarborough doubled their lead as a ball in from the right was swept home by Dean into the bottom corner from just inside the penalty area. In the final minutes, RCA forced a series of corners which were all cleared. In stoppage time, Callen made a driving run down the left and crossed but again the ball was cleared.

Obviously a hugely disappointing result for everyone connected with RCA. But there are many positives to take from this excellent cup run. This is only the second time in the club's 54 year history that we have won three FA Cup matches in any one season - the last time was 20 years ago when RCA beat Chester-le-Street Town, Darwen and St Helens Town, before losing to Hyde United.

And as for today's game, there was nothing to choose between the sides at half-time, against a side playing their football one level higher than RCA: a close range header was as near as either side came to breaking the deadlock. In the second half, Scarborough came out strongly and took the game to RCA, scoring the crucial first goal in a tight match. RCA then had their best spell in the match, creating some good opportunities to equalise, and were still in the game until the 83rd minute when Scarborough scored their second goal.

This afternoon's RCA man of the match was chosen by Jackie Callen. Jackie picked Greg Swansbury for being “rock solid as usual at the back”. Well played, Greg!

RCA are back in Northern League action this week with a Shildon double-header - on Wednesday, 20 September, we travel to Dean Street for a 7:30pm kick-off, and then on Saturday afternoon, 23 September, Shildon are the visitors to Meadow Park.