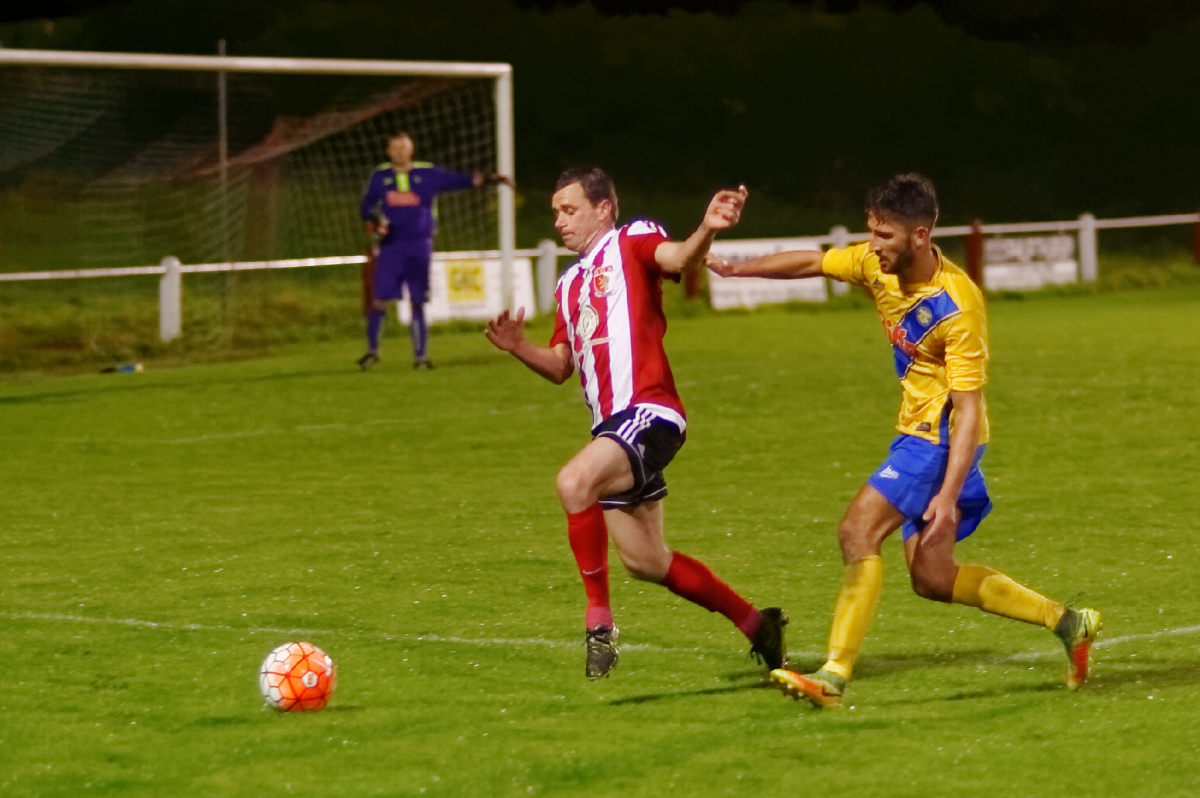 Colin Larkin chases a through ball as RCA try to get back into the match.

Sunderland RCA were back in Northern League action at Meadow Park tonight against another newly-promoted side, Stockton Town.

Stockton have had a real baptism of fire since being promoted to Division One and are yet to record a point after all eight matches in the league so far this season ended in defeat. But this is a club that has become accustomed to winning - their last five seasons have seen them crowned as champions: in the Wearside League, Stockton won the league on four consecutive occasions, each season finishing with over one hundred points. They finally took promotion after ground grading issues were resolved and were promoted to the Northern League second division where they were again crowned champions last season at the first attempt.

Stockton did give RCA a very close match last season in the FA Vase, when an extra-time penalty from Colin Larkin was all that separated the sides.

RCA are currently in a rich vein of form - unbeaten in seven matches, winning six of them, and, as a result, making tremendous progress in the FA Cup as well as holding a top eight position in the Division One table.

Presumably with one eye on Saturday’s big FA Cup match at Scarborough, and guarding against further injury, RCA made six changes to the side that beat Billingham Synthonia at the weekend. Out were Neal Bussey, Adam McGuinness, Greg Swansbury, Dylan Elliott, Michael Charlton and Colin Larkin. In came Jack Patton (to make his debut for RCA), Jak Ashton, Luke Richardson, James Cassidy, Jonathan Davis and John Butler.

It was the visitors that got off to a perfect start, opening the scoring after just 45 seconds - a ball in from the right along the RCA six-yard line was only half cleared and Coleman latched onto the loose ball to finish smartly into the bottom, left corner from ten yards. In the 5th minute a lovely crossfield pass by Hayes was controlled by Coleman, who fired in a shot from 25 yards which Patton turned over for a corner which was cleared. Five minutes later and RCA were level - there seemed to be no apparent danger but an awful mix up in the Stockton defence allowed O'Neill to nip in, go around Arthur, and almost walk the ball into the net. In the 14th minute, RCA produced a good move as Noble and Cassidy combined well down the right but Cassidy’s cross was blocked by a Stockton defender. Three minutes later and Stockton won a free-kick for a foul by Noble - Craggs’ free-kick was on target and clawed away by Patton for a harmless corner.

Midway through the first half and Hayes made a good run down the left and his cross was sliced over the crossbar by Noble for a corner which was cleared. Four minutes later and Butler was put through on goal down the inside left channel but Arthur was quick off his line to smother the effort. The ball then broke loose to Butler who fired a shot over the crossbar from the apex of the penalty area. Seconds later and RCA won a corner which was headed narrowly wide by Callen. In the 29th minute D Mulligan fired in a shot from 25 yards just wide of the post. And one minute later a cross from substitute Roddam was headed wide by Craggs. Stockton retook the lead one minute later as a ball in from the right was finished by Woodhouse. And barely a minute later, Stockton had a third after a mix up in the RCA defence this time allowed Craggs to score. In the 38th minute Hayes made a good run forward, twisting and turning, before getting a shot away that deflected over the crossbar for a corner which was cleared. One minute later and RCA were attacking as Callen made a driving run through central midfield before firing in a shot that was tipped around the post by Arthur for a corner which was cleared. Two minutes later and Cassidy made a good run down the right before sending in a deep cross which was headed back across goal by Butler and over the crossbar. In first half stoppage time, Woodhouse fired in a fierce shot from 20 yards that produced a terrific save from Patton, diving full length to his left to turn the ball around the post for a corner which was cleared.

RCA had the first attack of the second half - Cassidy made a good run down the right before playing the ball back to Noble, whose cross was headed straight at Arthur by Callen. In the 52nd minute, Callen made a determined run down the inside left channel before firing in a shot from the edge of the penalty area that was blocked. Callen then fired in a second attempt that went narrowly wide of the post. RCA were having a much better second half, and two minutes later, Cassidy again made a good run down the right before sending in a super low cross that Butler was inches away from getting on the end of, sliding in from six yards. In the 57th minute RCA made a double substitution, with Colin Larkin replacing John Butler, and Adam McGuinness replacing Luke Richardson.

On the hour mark, Callen and O'Neill played a lovely one-two but Callen’s attempted cross was smothered by Arthur. In the 64th minute, Callen made a driving run through central midfield before firing in a shot from 25 yards which was straight at Arthur. In the 74th minute, Dylan Elliott replaced Luke Page. Two minutes later and RCA won a free-kick for a foul on O'Neill 20 yards from goal - Elliott and Noble stood over the ball, but it was Noble who fired in a low shot straight at Arthur. In the 84th minute, RCA lost possession in midfield and a super crossfield ball was controlled by Carter who then went around Patton and side footed the ball into the empty net to well and truly finish the match.

A thoroughly deserved victory for the visitors tonight, who played a great match and took their chances clinically. For RCA it was a night to forget ahead of the big match on Saturday. RCA did have a number of attempts on goal in the second half but most were straight at, and comfortable for, Arthur.

Tonight's RCA man of the match was chosen by Peter Elliott. Peter picked James Cassidy for “working hard up and down the touchline and putting a lot of good balls into the penalty area”. Well played, James!

Next up is the match that RCA fans have been eagerly awaiting since the victory at Liversedge, as we travel to Scarborough Athletic on Saturday, 16 September for the Emirates FA Cup Second Qualifying Round match. Kick-off is at 3pm. It promises to be a great occasion and hopefully a memorable one. Hope to see you there supporting the lads!