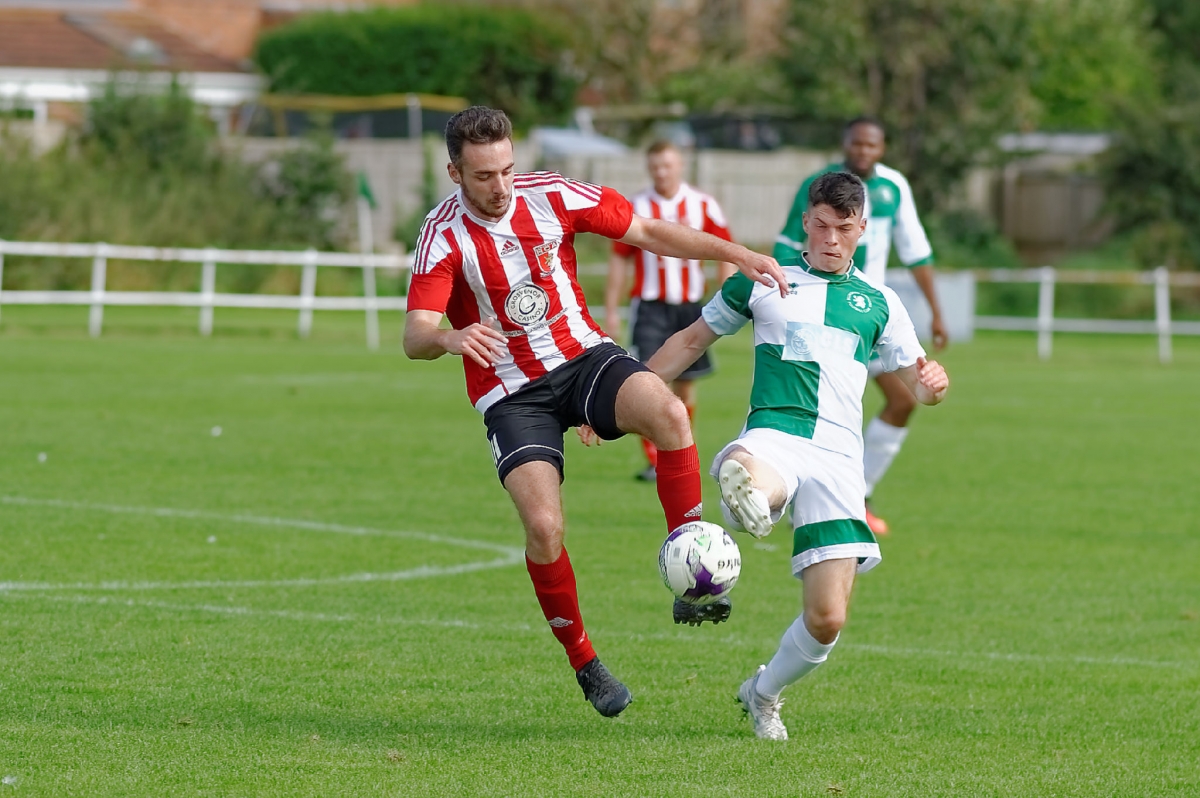 Stephen Callen competes for the ball with Synners' Christopher Salmon.

Sunderland RCA were back in Northern League action today with a trip to newly-promoted Billingham Synthonia. After spending two seasons in Division Two, it is fair to say that Synners have had a tough start back in Division One, losing an FA Cup Extra Preliminary Round tie on the opening day of the season and the following five league matches without even scoring a goal. However, their last two league matches have brought away draws at Washington and Jarrow Roofing which will bring hope that a corner has been turned.

RCA, meanwhile, have had a terrific start to the season with some impressive victories, none more so than the fabulous 4-0 win in the FA Cup First Qualifying Round replay at Liversedge on Tuesday.

RCA made one change from the side that started the match at Liversedge on Tuesday - Craig Hodgson, injured during the match, was ruled out and back into the starting line-up came Dylan Elliott.

It was the home side who had the first noteworthy attempt - in the third minute Hillerby played a ball in from the left and Scaife-Wheatley turned and fired a shot narrowly wide from the edge of the penalty area. Three minutes later and Callen made a good run through central midfield before releasing Charlton but, unfortunately, Charlton stood on the ball and it was hacked clear. Two minutes later and a ball out to the left from Elliott was superbly controlled by Callen who squared the ball to Larkin, whose shot from the edge of the penalty area was saved by Gibbs. In the 14th minute RCA were awarded a penalty - Page raced into the penalty area in pursuit of a through ball and, as Gibbs advanced to make a challenge, the ball broke loose and Gibbs pulled Page back and the RCA midfielder went to ground. After a three minute delay for Gibbs to be cautioned and treated for an injury, O'Neill stepped up and blasted the ball into the net to give RCA the lead. Two minutes later, Charlton crossed to O'Neill in the penalty area whose header was well saved by Gibbs.

In the 32nd minute, Salmon made a good, driving run down the right before cutting into the penalty area but a terrific sliding challenge from Swansbury snuffed out the danger. One minute later and this time it was Hassan who made a powerful run down the right before firing in a shot from a tight angle that was saved by Bussey at his front post. In the 34th minute, RCA doubled their lead - O'Neill made a super run into the penalty area and crossed to Elliott, whose initial effort was blocked but the ball rebounded straight back to Elliott who finished high into the roof of the net from close range. With half-time approaching, Synners won a free-kick 25 yards from goal after a foul by Page. Gavin curled the free-kick high over the crossbar. In first half stoppage time Synners got a foothold in the match - a corner kick on the right was whipped in low by Hillerby and Hassan latched onto the ball to finish well from eight yards.

It was RCA who had the first attack of the second half as Callen made a good run down the left and forced a corner which was cleared behind for a subsequent corner which was punched clear by Gibbs. In the 52nd minute, good play by Page in midfield released Callen on the left who drove into the penalty area and fired a shot narrowly wide of the post. Five minutes later and Elliott played a terrific 40-yard diagonal ball into the path of Callen on the left but a Synners defender was able to clear the ball for a throw-in. In the 64th minute, the ball was given away by RCA at the back and Edwards fired in a shot that was well saved by Bussey.

Midway through the second half and RCA won a free-kick for a foul on Larkin - Elliott's free-kick was won in the penalty area by the head of Preston and the ball fell to Callen whose goal bound shot was blocked for a corner which was cleared. In the 68th minute Callen was replaced by James Cassidy, and McGuinness was replaced by Clayton Davis. In the 71st minute, RCA restored their two goal advantage - Bussey cleared the ball and O'Neill flicked the ball forward to Larkin, who sent a super header over Gibbs and into the net. Five minutes later and Swansbury - who, hitherto, had played every minute of every match so far this season - was injured and replaced by Luke Richardson. In the 77th minute, RCA got a fourth goal - Davis made a driving run down the right before squaring the ball to Larkin who finished well despite Gibbs getting a hand to the ball. Seven minutes later and Hillerby made a good run and cross which was cleared for a corner which was well held by Bussey under pressure from several Synners players. In the final minutes, Larkin exchanged passes with O'Neill before firing in a shot that was blocked. From the rebound, O'Neill fired in a shot was again blocked. And at the other end Salmon fired in a good effort that was well saved by Bussey.

Given the stark contrast in form of the two sides so far this season, this was a match that RCA would have expected to win. RCA's unbeaten run is now extended to seven matches - six of which have been victories.

Next up for RCA is another team who were promoted last season - Stockton Town are the visitors to Meadow Park this Tuesday, 12 September. Kick-off is at 7:30pm.