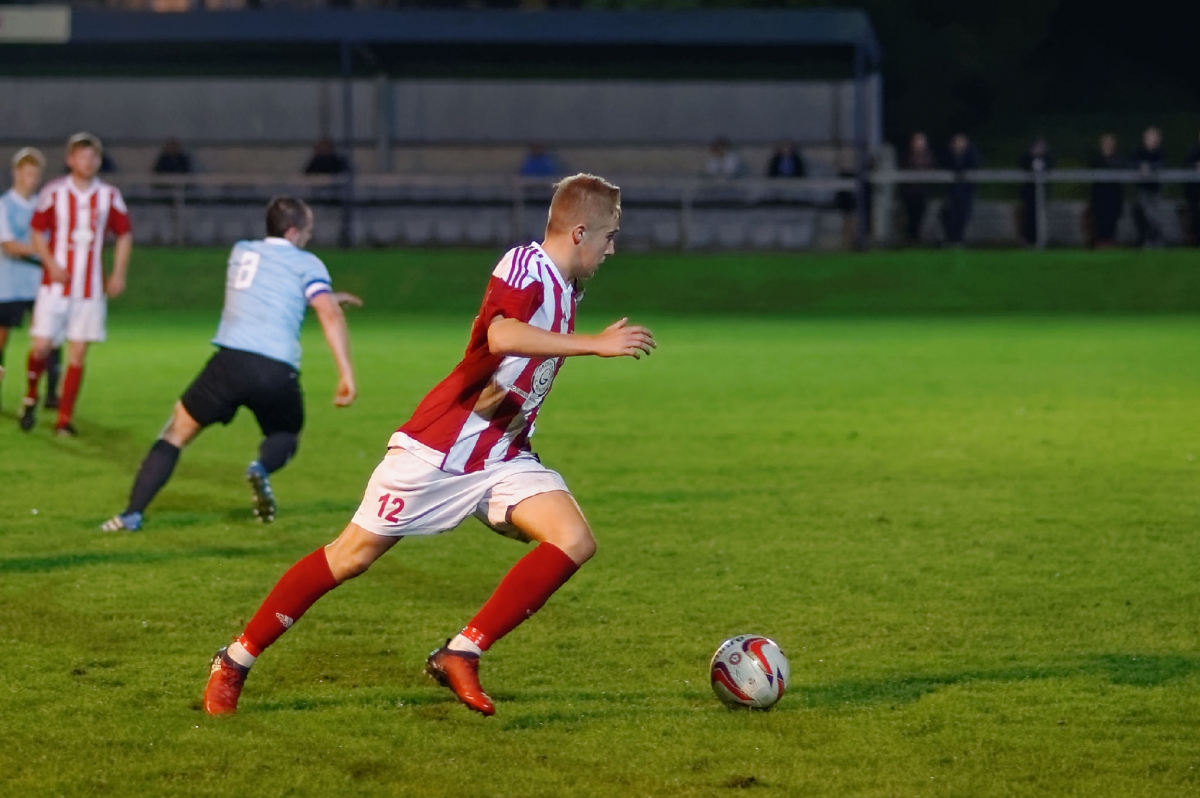 Dylan Elliott capped a terrific second half performance with another cracking goal.

Following Saturday’s goalless Emirates FA Cup First Qualifying Round match at Meadow Park, Sunderland RCA made the trip to West Yorkshire for the replay with Liversedge. Prior to kick-off, both sides were aware that the winners would face a trip to Northern Premier League Division One North side Scarborough Athletic in the Second Qualifying Round on Saturday, 16 September.

There was good news on the injury front for RCA as both Stephen Callen and Colin Larkin were fit again and in the starting line-up. Callen started on the left wing in place of James Cassidy, and Larkin started up front, with Ross Preston moving back to centre half and Craig Hodgson switching to central midfield.

The match was only two minutes old and RCA got off to the perfect start - a long ball out to the left was superbly controlled by Callen, who drove into the penalty area before squaring the ball to O'Neill who fired in a shot through a crowd of players and into the net from eight yards. In the seventh minute, RCA won a free-kick for a foul on Callen. Noble's free-kick was flicked on by Callen and headed behind by Fell for a corner which was cleared by Waggett. The home side then had a good spell of play forcing a number of free-kicks in and around the RCA penalty area, without troubling Bussey. In the 16th minute, RCA won a free-kick for a foul on O'Neill. Noble again took the free-kick but this time went directly for goal, firing the ball over the crossbar from 25 yards. Two minutes later and Liversedge had their first real effort on goal - Kennyon made a good run down the right and, after a neat exchange of passes with Morton, fired in a shot from 25 yards over the crossbar. And two minutes on and O'Neill fired in a shot from 25 yards straight at Waggett.

Midway through the first half, Kennyon made a good run down the right and crossed into the penalty area where Fogarty beat the advancing Bussey to the cross but headed wide of the post. In the 35th minute, RCA were unlucky not to double their lead - good play from Page in central midfield released Larkin, whose cross was fired off the post by O'Neill. Three minutes later and RCA won a free-kick after a super run by Page saw the midfielder upended on the edge of the penalty area - Callen’s free-kick was cleared for a corner, and from corner, O'Neill fired in a shot which was blocked at close range. In the 39th minute a Liversedge free-kick was driven in low and cleared up to Larkin, who broke well before releasing Charlton on the right whose shot was well saved by Waggett for a corner which was cleared. As half-time approached, Hodgson was forced to retire after feeling the effects of an earlier challenge which had also seen Kane leave the field injured. Hodgson was replaced by Elliott, who was straight into the action - RCA won a free-kick 25 yards from goal after a foul on Larkin, and Elliott stepped up to send a curling effort over the crossbar.

It was Elliott again who was in the action five minutes after the restart with a terrific run through central midfield before firing in a super shot that was tipped around the post for a corner by Waggett. From the corner Waggett claimed the ball well under the crossbar. Three minutes later and RCA doubled their lead with a goal that was as bizarre as it was unlucky - RCA won a corner, and McGuinness whipped the ball into the penalty area and Waggett, under pressure from Swansbury, was unable to hold the ball and it bounced towards the goal line where Fell hooked the ball into the face of his own player and the ball rebounded into the net.

In the 73rd minute lovely play by Page in midfield released Elliott who drove down the right but his cross was cleared. Two minutes later and Liversedge were forced to play the final 15 minutes of the match with ten men after Kane was injured and unable to continue and the home side had already used their three substitutes. In the 80th minute, Elliott made a terrific run through central midfield before being fouled on the edge of the penalty area - Armstrong’s free-kick was well saved by Waggett diving low to his right. Two minutes later and more good play by Elliott in midfield found Armstrong, whose delightful flick found Charlton in the penalty area, but his shot was fired over the crossbar. In the 84th minute, Kennyon made a good run down the right and his cross was cleared by Preston for a corner which, in turn, was cleared. Three minutes later and RCA had a third - Elliott picked up the ball in midfield before advancing ten yards and unleashing a super strike low into the bottom right corner from 25 yards for his sixth goal of the season. As the match entered the final minute, Charlton made a good run down the right before firing in a shot from an angle in the penalty area which was well saved by Waggett. There was still time for a final RCA goal in stoppage time as a ball in from the right was swept home by O'Neill from close range for his tenth of the season and fourth in the FA Cup.

If Liversedge won on points at Meadow Park on Saturday, then RCA delivered a knockout blow at Clayborn tonight with a superb team performance.

But tonight's result and performance was only possible thanks to the commitment of the lads, many, if not all, of whom will have had work commitments on Tuesday and Wednesday - to make a 220-mile round trip for a midweek match demonstrates how much these lads want to play for the club and the manager. Brilliant stuff!

The first three rounds of the FA Cup has seen a colossal 461 non-league clubs knocked out of the competition already, and RCA join Newcastle Benfield and Shildon as the only three Northern League sides still remaining in this season's FA Cup. A magnificent achievement.

In four FA Cup matches so far this season, RCA have scored 11 goals and conceded just one.

Tonight's RCA man of the match was chosen by Trevor Preston. On a night when there were a few contenders, Trevor picked Dylan Elliott for “a class performance, displaying composure beyond his years, and scoring a cracking goal “. Well played, Dylan!

RCA are back in Northern League action on Saturday when we travel to newly-promoted Billingham Synthonia. Please note that Synners have moved from their former Central Avenue home and are now playing at Norton's old ground - Norton Sports Complex, Station Road, Norton, Stockton-on-Tees, TS20 1PE. See you there.

Sorry I missed such a great night.

Cheers Tim. The lads were brilliant. Can't wait for Scarborough!