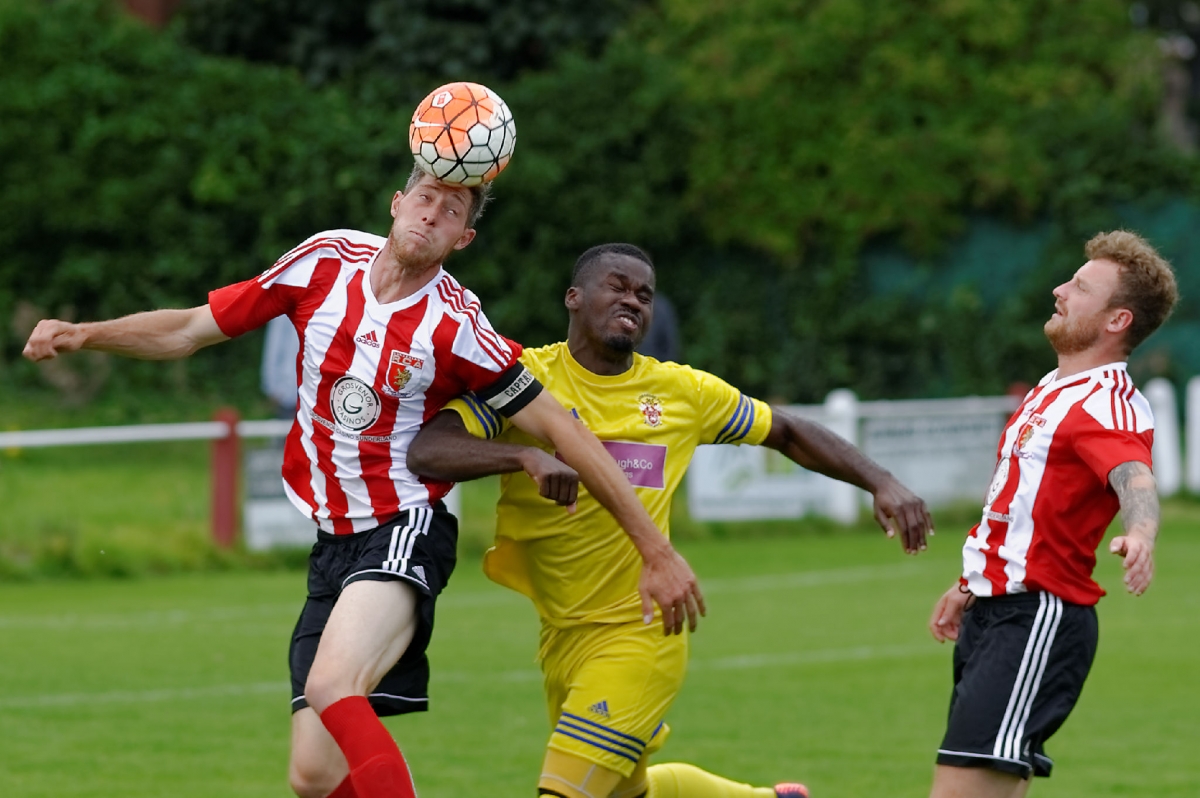 RCA captain Greg Swansbury heads the ball clear during the first half of the match.

Sunderland RCA went into today's Emirates FA Cup First Qualifying Round match with Liversedge on the back of four wins in a row. Liversedge went into the match unbeaten so far this season.

RCA made one change to the side that had won - and defended - so impressively at Consett on Bank Holiday Monday - Clayton Davis returned in place of the injured Ross McNab.

The match was only 40 seconds old and Liversedge were straight on the attack - Walton made a good run down the left, cutting into the penalty area, before squaring the ball to Fogarty whose shot beat Bussey but was cleared off the line by Swansbury. Two minutes later and RCA won a free-kick for a foul on Page. Elliott whipped in the free-kick but the flag was up for offside. In the 14th minute, Liversedge won a free-kick for a foul by Hodgson. The free-kick was tipped away from goal by Bussey and Davis completed the clearance to the halfway line where RCA launched a quick break - Charlton played in Cassidy down the left with a lovely flick, and Cassidy drove into the penalty area before crossing to the far post. The ball came back to Charlton on the right who crossed the ball back into the penalty area where O'Neill headed wide. Three minutes later and a throw-in on the left found Preston whose lay-off was picked up by O'Neill who fired the ball wide from the edge of the penalty area.

In the 33rd minute, good play from Elliott released Cassidy down the left but his cross was blocked by Waggett. Six minutes later and Cassidy made another driving run down the left but his cross was cleared. From the clearance, Preston was fouled as he contested the loose ball. Elliott's free-kick from 25 yards cleared the crossbar. With half-time approaching, Liversedge created a couple of good chances - first, Morton made a good run down the right and crossed but Fogarty fired the ball over the crossbar. And then, one minute later, Morton again crossed from the right and Walton's header was tipped over the crossbar by Bussey but the flag was up for offside.

Just as in the first half, it was the visitors who had the first chance of the second half. Walton made a driving run into the penalty area and forced a corner that was punched clear by Bussey. From Bussey’s punch, RCA created a good chance as the ball was picked up by Cassidy, who made a super 40 yard run into the penalty area before squaring the ball but it was cleared by Kenny one yard from the goal line. In the 51st minute, RCA were awarded a free-kick after a foul on Charlton. McGuinness whipped in the ball and Swansbury’s header bounced into the ground before being collected comfortably by Waggett. Three minutes later and Liversedge won a corner after Davis blocked a good run by Kennyon - Bussey again punched the ball clear. And a further three minutes on and Morton made a driving run down the left, into the penalty area but stabbed his shot wide of the far post. Liversedge were now getting a real grip on the match and in the 62nd minute were close to opening the scoring - a ball was played into Fogarty who fired in a ferocious, goalbound shot from 25 yards that was superbly tipped over the crossbar by Bussey for a corner which was cleared by McGuinness. Two minutes later and Stephen Callen, who your correspondent had said may be out for up to two months on Monday, made a miraculous recovery and came off the bench, replacing Preston.

As the match entered the final 20 minutes, RCA had a great chance to take the lead - Callen played in Charlton down the right, who crossed into the penalty area where Page fired the ball wide from a good position. Three minutes later and Charlton released Davis down the right, whose cross on the byline was blocked for a corner which was tipped over the crossbar by Waggett for a second corner on the far side which was cleared. In the 76th minute, Liversedge were so close to opening the scoring - Walton made a good run into the RCA penalty area before cutting the ball back to Fogarty whose shot was blocked by a combination of Bussey and McGuinness. The ball was only cleared as far as the edge of the penalty area where Kane fired in a fierce shot was well held by Bussey, diving to his right. Seven minutes later and Callen played a good ball into the penalty area but Charlton’s shot was blocked for a corner which was cleared. In stoppage time RCA conceded a free-kick in a dangerous position on the apex of the penalty area. RCA fans held their breath as Kane lined up the ball but his effort was fired over the crossbar.

A good, highly competitive match played in front of RCA’s highest attendance of the season so far of 176.

This afternoon's stalemate is the first time that RCA have failed to score so far this season. And it means that we do it all again at Clayborn on Tuesday evening, 5 September. Kick-off is at 7:45pm.

RCA join Newcastle Benfield and Shildon as the three Northern League teams remaining in this year's FA Cup - the draw for the Second Qualifying Round will take place on Monday lunchtime.

Today's RCA man of the match was chosen by John McClements. John picked Neal Bussey for “a top save in the second half and several other excellent saves during the match”. Well played, Neal!