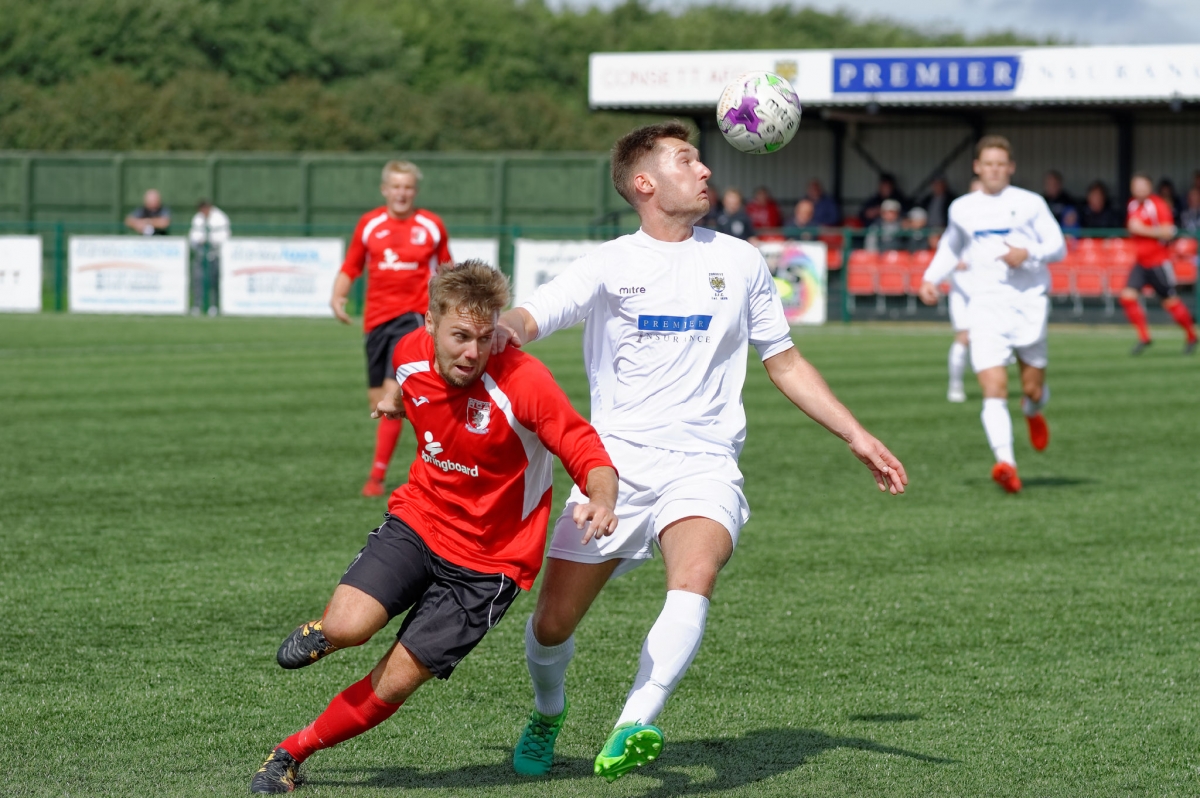 Michael Charlton competes for the ball during the first half of the match.

Sunderland RCA made the Bank Holiday Monday trip to Consett for what was the home side's first Northern League match at the Belle View this season.

Both sides have had excellent starts to the season - each losing only one match so far - and will represent the Northern League in the FA Cup on Saturday when Consett travel to Ossett Town and RCA host Liversedge in the First Qualifying Round.

RCA were dealt a major injury setback when Stephen Callen - who has played every minute of RCA's seven matches so far this season - was ruled out with a fractured toe and could be out of action for up to two months. Ross Preston was picked to partner Nathan O'Neill up front. And Ross McNab returned from injury to make a first appearance of the season at right back in place of Clayton Davis.

It was the home side who had the first effort of the match after two minutes when a ball from the right was played into Ryder who fired a shot from 30 yards over the crossbar. Two minutes later and Ryder made a run down the right before crossing but his cross was held by Bussey at the front post. In the tenth minute RCA took the lead - Page won the ball back in midfield with a terrific challenge, and then released O'Neill with a perfectly weighed through ball between two defenders and O'Neill slotted the ball under the advancing Coombe for well-worked goal. Two minutes later and Consett won a free-kick on the edge of the penalty area for a foul by Preston on Hawkins. Lavery’s free-kick was chipped over the crossbar. In the 18th minute Hawkins made a run and cross from the left that was partially cleared and then Ryder crossed from the right but his cross was easily caught by Bussey. Six minutes later and a cross from the right by Convery was headed behind for a corner - from the corner, Bussey claimed the ball at the second attempt.

In the 29th minute Mackay received the ball 20 yards from goal but his shot was straight at Bussey. The match then went through an eventful three minute period: in the 31st minute McNab landed awkwardly and was forced to retire and was replaced by Armstrong. One minute later, and Consett equalised - a ball was played through the middle to Sweet, who took a couple of strides before confidently finishing into the corner of the net. Amazingly, within a minute, RCA were back in the lead. Cassidy made a good run down the left and crossed to Preston who fired in a shot off the crossbar but was clattered at the same time and the referee immediately pointed to the spot. O'Neill stepped to smash the ball home. In the 38th minute a dangerous cross by Sweet was clawed away by Bussey at full stretch for a corner which was cleared. As half-time approached, RCA won a free-kick which was whipped in by Elliott and Page at the far post fired in a shot that was deflected behind for a corner which was cleared.

Consett had the first attack of the second half when Sweet won a free-kick on the edge of the penalty area. Convery's free-kick was headed behind for a corner which was cleared by Swansbury. In the 53rd minute Hawkins made a driving run down the left and forced a corner which was cleared by McGuinness. Four minutes later and RCA had their first real effort on goal as O'Neill made a good run through central midfield before playing in Charlton, whose shot looked to take a deflection over the crossbar, but a goal kick was given.

Midway through the second half and Convery made a good run and cross which was held by Bussey at the front post. In the 70th minute a long ball was played up to Sweet on the edge of the penalty area, and Sweet turned smartly before firing a fierce half-volley over the crossbar. RCA were now under the cosh as Consett pressed for an equaliser - one minute later and Hawkins fired in a shot from 25 yards which was deflected behind for a corner which was cleared. Three minutes later and a good, clearing header by Hodgson set RCA up for a swift counterattack as Preston won a brave header to release O'Neill whose shot was fired over the crossbar.

As the match entered the final ten minutes, Sweet fired in another good effort that was tipped over the crossbar by Bussey for a corner which was cleared. RCA went straight up to the other end of the pitch when O'Neill chased a ball down the inside right channel but his cross was just too high for Charlton to get a good header in and the ball was collected by Coombe. With five minutes remaining Consett had a great chance to equalise - Mackay was put through and went around Bussey but, as the angle got tighter, fired his shot into the side netting. In the final minute of normal time a cross from the right was flicked towards goal by Mackay but Bussey pulled off a brilliant reflex save with his outstretched leg to turn the ball behind for a corner. From the corner the ball was headed clear by McGuinness and played back in where Bussey came to claim the ball under pressure from several Consett players.

Another terrific result for RCA this afternoon and a fourth win in nine days. RCA defended magnificently in the second half under a lot of Consett pressure, and when Consett did get through the back four, Bussey was there to make sure RCA came away with three points with one cracking save and safe handling all afternoon.

This afternoon's RCA man of the match was chosen by Tom Swinhoe. Tom picked out Ross Preston for “covering every inch of the pitch, holding the ball up well and constantly putting pressure on the Consett back four”. Well played, Ross!

Next up for RCA is another big match in the FA Cup, this Saturday, 2 September, when Liversedge of the Northern Counties East League visit Meadow Park for a First Qualifying Round tie.