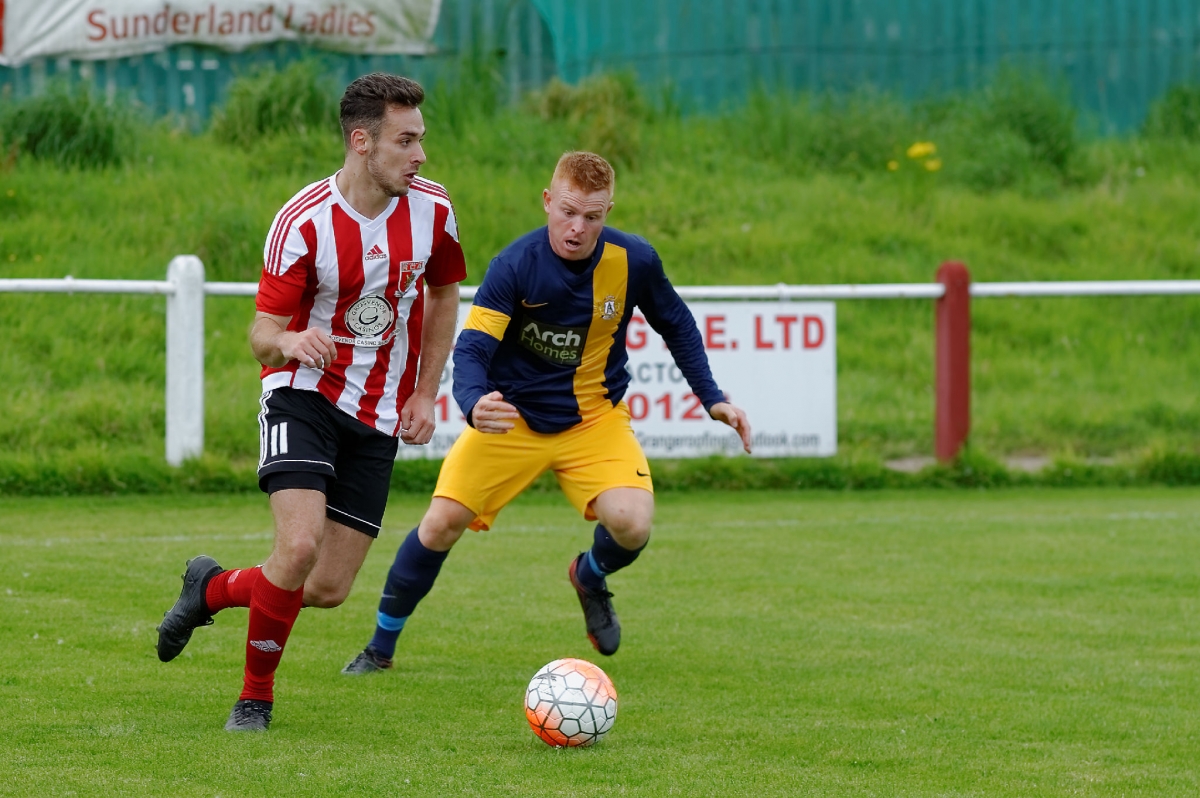 Sunderland RCA were back in Emirates FA Cup action against Ashington today, just a fortnight after the excellent win over Garforth Town in the Extra Preliminary Round.

RCA made two changes the side that lost at Marske United on Tuesday, with Clayton Davis making a first start of the season and Nathan O'Neill starting up front - replacing Reece Noble and Ross Preston.

Prior to the match there was an impeccably observed minute's silence to pay respects to 18-year-old Kieran Oliver, a young Northern League match official who was tragically killed in a car crash last week, and the recent attacks in Spain.

The opening few minutes of the match were uneventful as both sides cancelled each other out. In the 8th minute RCA had the first half chance of the match - Larkin won the ball in midfield before releasing Charlton but Grant was quick off his line to gather the ball at Charlton’s feet. One minute and Ashington had their first chance of the match as a long ball down field reached Pearson who shot wide. In the 14th minute Davis made good progress down the right and won a corner which was cleared for a second corner, which, in turn, was cleared by McAndrew. Two minutes later and Ashington won a free-kick which was headed to the edge of the penalty area, where Sampson lofted the ball back towards goal and Bussey, backpedaling and at full stretch, tipped the ball over for a harmless corner.

Midway through the first half and Ashington won a free-kick for a foul by Davis. The free-kick was well claimed by Bussey. In the 29th minute RCA took the lead. Callen played the ball into Charlton on the left-side of the penalty area. Charlton then turned and fired in a shot that was parried by Grant to O'Neill, who, just as he was at Marske on Tuesday, was in the right place at the right time to smash the ball high into the net from six yards. Two minutes later and Larkin, clearly hobbling, was withdrawn and replaced by Cassidy.

In the 35th minute Hodgson won the ball back for RCA with a terrific challenge before playing in O'Neill down the right. O'Neill the squared the ball to Callen, whose shot from the edge of the penalty area bobbled and was sliced wide. Four minutes later and Page played the ball up to O'Neill, who rose to head the ball down into the path of Callen whose shot was straight at Grant. With three minutes to half-time RCA were close to a second goal - Callen beat the offside trap before playing the ball to Charlton, who went around Grant in the penalty area but Grant was able to recover as Charlton was forced wide. Charlton was then able to pull the ball back to Elliott, whose shot was blocked. Right on half-time, Pearson made a good run down the left before going to ground - the referee awarded a corner which was cleared.

With RCA now kicking down the slope with the wind behind them, it was the home side that had the first opportunity of the second half - the move started with great play by Charlton, winning two strong challenges, before Elliott picked up the loose ball and released Callen down the right. Callen sent in a low cross which O'Neill played to Elliott, whose shot from 12 yards was saved by Grant for a corner which was cleared. In the 51st minute RCA won a corner that was delivered in low by Elliott and O'Neill turned the ball goalward, but, again, Grant was there with a good save. One minute later, though, and Grant was powerless to prevent RCA from doubling their lead - Callen received the ball, 25 yards out and back to goal, before turning and firing in an unstoppable half-volley. A wonderful strike. Two minutes later and Charlton played in Callen, who was in on goal, but Grant made a super save to his left to deny Callen two goals in as many minutes. In the 60th minute Sampson fired in a shot that was comfortable for Bussey, and, one minute later, Ashington won a free-kick that was fired over the crossbar by substitute Scott.

Midway through the second half and RCA got a third with a beautifully worked move - Callen played a lovely ball to Cassidy, who drove into the penalty area before crossing low to Elliott who confidently swept the ball past Grant and into the net. Four minutes later and RCA had a fourth - Elliott won a great challenge in the centre circle before playing the ball forward to Callen. Callen still had a lot to do, with no support, the RCA striker drove into the penalty area, twisting and turning, before firing a right foot shot past Grant from a tight angle. Another superb goal. With 15 minutes remaining, Ashington won a corner after a shot from Sampson was tipped over the crossbar. From the corner Ben Harmison headed the ball wide. In the final few minutes, Cassidy made another good run down the left but his cross was just too far in front of Callen and was collected by Grant.

A magnificent team performance this afternoon, which, for me, was up there with the 5-0 win at Consett and the 3-1 win at Dunston in the Vase last season. RCA make the First Qualifying Round for the first time since the 1998/99 season and we await the draw on Monday lunchtime with great interest.

The only minor (but, in the bigger picture, actually rather major) disappointment, on an otherwise brilliant afternoon for RCA, was the attendance of 98 - which included a groundhopper from Lancashire and a healthy number of Colliers who had made the journey from Northumberland. Folk clearly don't know what they are missing watching Northern League football - the high standard of the football set against the admission price is, pro rata, unbeatable.

This afternoon's RCA man of the match was chosen by RCA legend Joe Dixon. As someone with only a working knowledge of football, it's always a privilege for me to stand and chat with Joe. After praising every player and the team as a unit for playing “tremendous football in difficult conditions”, Joe picked out Stephen Callen as man of the match, stating that Stephen “has so much class, with great balance and confidence, and was unlucky not to get a hat-trick”. Well played, Stephen!

RCA are back in Northern League action on Tuesday, 22 August, when newly-promoted Team Northumbria visit Meadow Park. Kick-off: 7:30pm. Hope to see you there.

There is also a fair report

There is also a fair report on the Ashington web site http://www.ashingtonafc.com/fixtures-results/report/1297