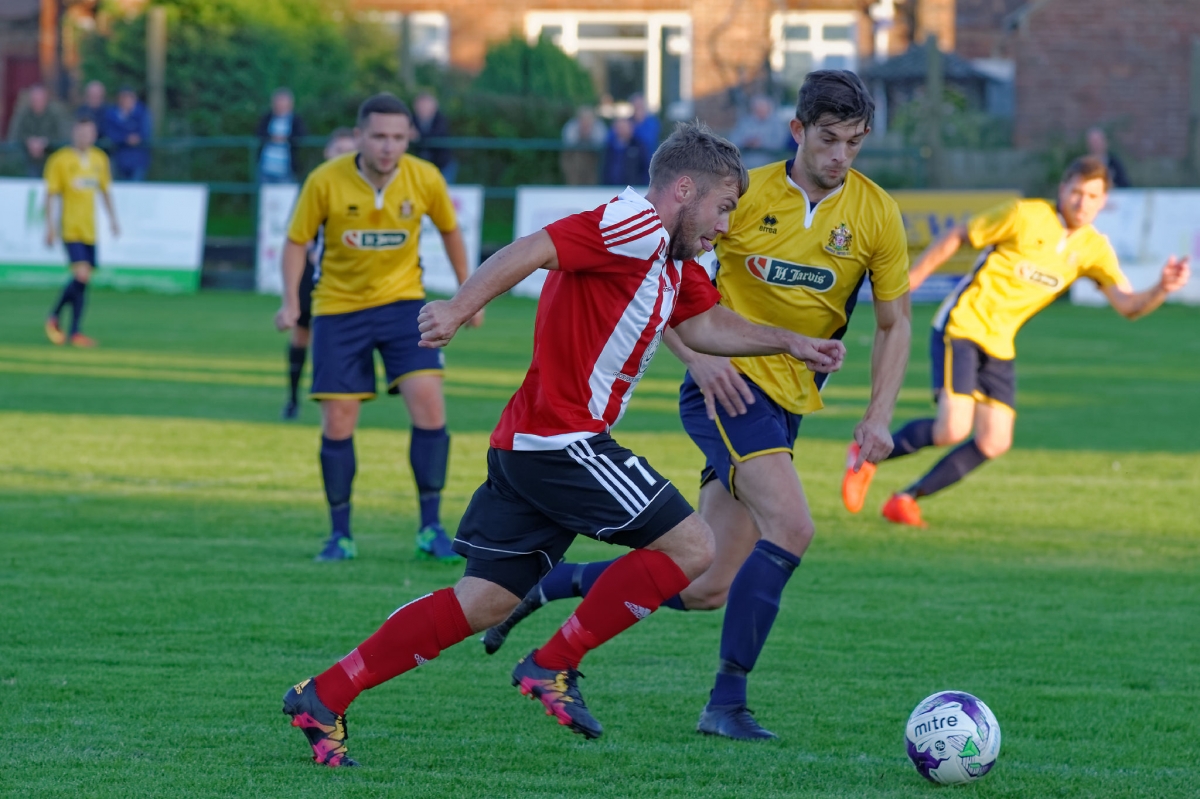 Michael Charlton makes a driving run down the wing.

Sunderland RCA’s first away match of the season was a trip to Marske United.

Marske, like RCA, are unbeaten this season. In the FA Cup Extra Preliminary Round, the original tie ended in an epic 4-4 draw at the GER Stadium in a match that swung back and forth. Marske were victorious in the replay, winning by a single Craig Gott strike. Their only Northern League match was at Seaham Red Star, where the visitors recovered from conceding an early goal to win the match 4-1.

RCA followed up wins in the FA Cup and Northern League with a 1-1 draw with Washington on Saturday. Last season Marske won all three of the matches between the sides - both Northern League fixtures and a League Cup Quarter Final at Meadow Park.

RCA reverted back to the side that beat Penrith the previous Tuesday, with Craig Hodgson returning in midfield and Nathan O'Neill taking a place on the bench.

It was Marske who had the first attack of the match in the second minute - Earl chased down a long ball before lifting the ball over the advancing Bussey but the ball went narrowly wide. In the 11th minute Marske won a penalty after a foul by McGuinness. Gott stepped up to hammer the ball into the bottom corner. Three minutes later and Marske doubled their lead after Hodgson played the ball back to Bussey whose clearance lacked height and was picked up by Round who was able to go around Bussey before slotting the ball into the empty net. Two minutes later, Charlton made a good run down the left before playing the ball to Larkin on the edge of the penalty area whose shot was blocked by Carling.

In the 20th minute RCA had an excellent chance to get back into the match - Elliott won the ball in midfield before putting Larkin in on goal but his shot was well blocked by Dean in the Marske goal. Six minutes later Larkin made good progress down the right and won a corner. McGuinness’ corner was claimed by Dean at the front post. In the 37th minute, RCA were millimetres from gaining a foothold in the match. Page won the the ball in midfield before playing the ball to Larkin on the edge of the penalty area. Larkin released Elliott who fired in a shot from a tight angle that hit Rowbotham’s shin and headed towards goal but he was able to recover and hook the ball off the goal line to prevent an own goal.

RCA began the second half strongly and within a couple of minutes created a good opening - Callen controlled a long ball superbly before driving into the penalty area and cutting the ball across to Page, but Page, surrounded by Marske defenders, was unable to get a shot away. In the 49th minute, Marske were reduced to ten men - Charlton and Kelly both went for a loose ball and the referee sent Kelly off for the challenge. Four minutes later, Noble played a good ball down the right to Page, and from the apex of the penalty area, Page fired in a shot across Dean and narrowly wide of the far post. Two minutes later and Marske launched an excellent counterattack - a long ball upfield was latched onto by Bulmer, who fired in a terrific effort on the run that was superbly saved by Bussey, turning the ball around the post for a corner which was cleared.

Midway through the second half and RCA won a free-kick 25 yards from goal after Elliott was tripped. Elliott picked himself up and curled his shot just wide of the post. By the 71st minute RCA were pressing hard for a goal and Noble crossed to O'Neill whose header was straight at Dean. Five minutes later and a good run down the left by Round resulted in a shot from a tight angle that was tipped behind for a corner by Bussey. In the 81st minute RCA got the goal their play during the match deserved - Callen received the ball on the left side of the penalty area before firing in a shot that was parried by Dean into the path of O'Neill who had the simple task of knocking the ball into the empty net. In the final minute of the match came RCA's last chance to salvage something from the match. Noble made a good block in his own half before driving forward and playing in substitute Cassidy. Cassidy crossed to O'Neill who fired agonisingly wide from the edge of the penalty area.

This may have been RCA's first defeat of the season but there are still positives to take from a bad tempered and highly physical match: after being 2-0 down after 14 minutes - against a side that will more than likely be in the top six at the end of the season - RCA didn't cave in and created plenty of good chances to get something out of the match. But just as we did last season in the corresponding fixture, where RCA were three down inside 30 minutes but came back well in the second half, scoring twice, RCA did the same tonight, conceding two soft early goals before playing their way back into the match, winning the second half, but, ultimately finishing the match with a defeat.

Next up for RCA is a big match at home to Ashington in the Preliminary Round of the Emirates FA Cup. Saturday, 19 August at Meadow Park. Kick-off: 3.00pm.