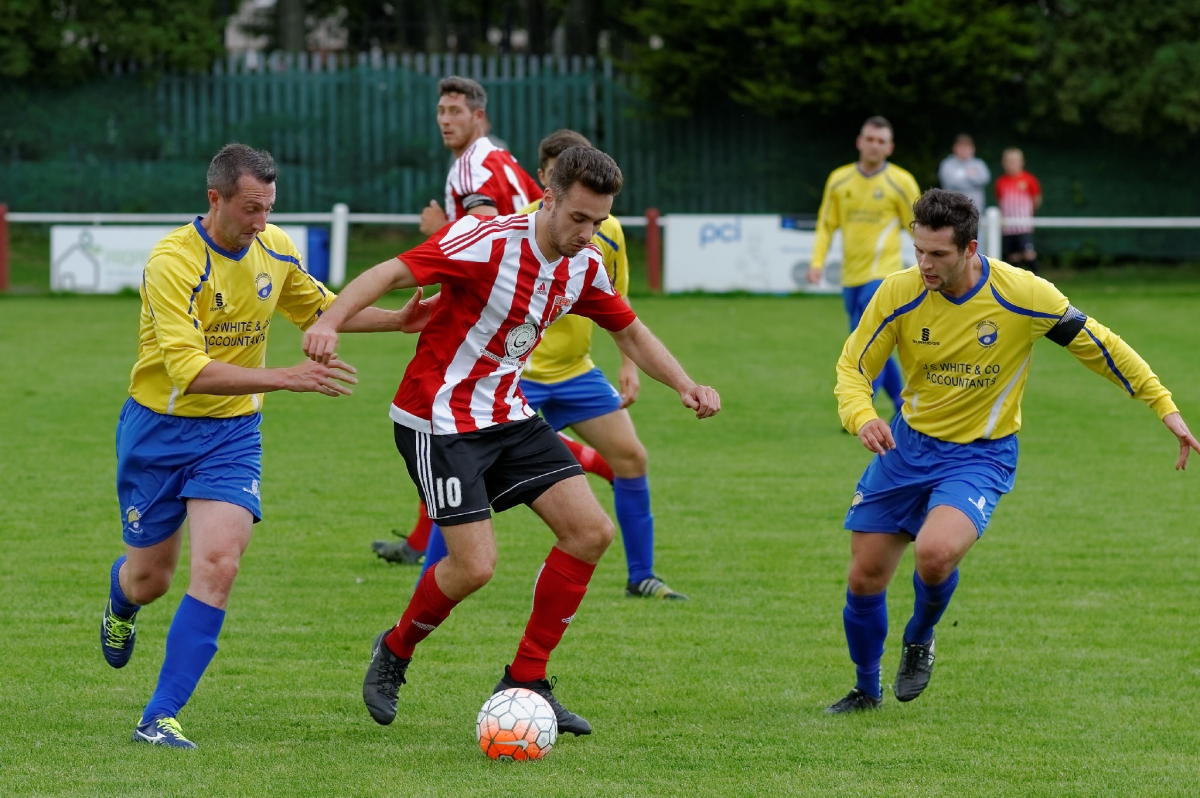 For Garforth Town's video of the match please click here.

Sunderland RCA welcomed Garforth Town to Meadow Park for the opening match of the season in the Emirates FA Cup Extra Preliminary Round. RCA have gone six years without an FA Cup victory, and Garforth one win in the last four seasons.

With Ross McNab and James Armstrong both injured, and Adam McGuinness serving a one-match suspension for a red card in the Penrith game from last season, RCA went with a back three and wing backs for today's match.

It was the visitors - kicking down the slope - who had the first attack of the match when a free-kick from Kitson was whipped in from the right straight through a crowded penalty area with no one able to get on the end of it and the ball went out for a goal kick. One minute later and Garforth forced a corner off Davis and the ball was cleared by Bussey. In the fourth minute RCA had their first attempt of the match - Hodgson sent a sweeping cross field pass to Davis on the left, who cut the ball back to Noble on the edge of the penalty area who shot wide. One minute later RCA won a free-kick for a foul on Charlton down the right wing. Davis’ free-kick was headed behind for a corner which was cleared. Back came Garforth, in an end-to-end opening period, when Turner made a good run down the left but his cross was charged down by Preston for a corner which was too high and drifted out of play for a goal kick.

In the 12th minute, Garforth produced a nice move when Leach made a good run down the right before playing in Coupland, whose shot from just inside the penalty area was saved by Bussey. Three minutes later and it was RCA back on the attack as Larkin received the ball on the right before going on a mazy run, evading two defenders, and shooting at Hagreen from inside the penalty area. A further three minutes on and Charlton made a super run and cross down the right and Callen sent a powerful header towards goal which was well saved by Hagreen.

Midway through the first half and RCA had the ball in the net - a free-kick on the right was curled into the penalty area by Davis and Swansbury slid in to stab the ball past Hagreen from eight yards, but the flag was raised for offside. Two minutes later and it was Garforth who took the lead - a free-kick on the right was driven in at pace by Kitson and the ball took a touch, possibly from Davis defending at the front post, and finished up in the back of the net. In the 33rd minute, RCA won a free-kick 20 yards from goal after a foul on Callen - the free-kick from Davis was curled over the crossbar. Two minutes later and RCA had a good chance when Charlton crossed from the right and Larkin headed towards goal but Hagreen produced a good, diving save to retain the lead for the visitors.

RCA were now pressing hard for an equaliser, and in the 37th minute won a free-kick on the left after a foul on Larkin. Davis again took the free-kick and Preston sent a flying header just wide of the post from the penalty spot area. Two minutes later and the pressure RCA had built up finally told when Hodgson played a terrific ball into Larkin and, as Hagreen advanced to close down the danger, Larkin sent a beautifully judged looping header over the stranded goalkeeper and into the empty net to level the scores. In the 41st minute Callen made a good run down the left and crossed to Charlton in the penalty area who shot wide. With half-time approaching Garforth were reduced to ten men - Larkin chased a through ball down the left and Hagreen raced from his goal and fouled the RCA striker and was shown a straight red card. This forced a reshuffle in the Garforth ranks, with Hamilton being sacrificed to allow substitute goalkeeper Weatherill to take the field.

It took until the 54th minute before the first meaningful attempt of the second half - a good move - Noble played the ball into Larkin who laid the ball off to Elliott who fired in a fierce shot that went narrowly wide of the post. Three minutes later and Charlton made a good run down the left and crossed to Callen whose header was well saved by Weatherill. In the 66th minute RCA took the lead and it was a goal made by substitutes - recent signing Luke Page made a driving run down the right, cutting into the penalty area, before unselfishly squaring the ball to O'Neill, in a better position, who side-footed the ball home from close range.

With fifteen minutes remaining RCA were unlucky not to seal the match as Page picked up the ball in midfield before firing in a shot from 25 yards which struck the base of the post and rebounded to safety. Three minutes later and RCA again struck the woodwork - Charlton made a good run down the right before crossing to O'Neill whose shot rebounded off the crossbar from close range. In the 85th minute Callen made a driving run down the left, checked, and fired in a shot over the crossbar. Callen wasn't to be denied a goal, however, and in stoppage time Charlton played Callen in and he slotted the ball past Weatherill from 20 yards to finish a half dominated by RCA against Garforth’s ten men.

After almost six years, RCA record a win in the FA Cup and will now face Ashington in the Preliminary Round at Meadow Park on Saturday, 19 August.

The Northern League season gets under way this Tuesday, 8 August, when Penrith make the long trip to Meadow Park for a 7:45pm kick-off.

Some highlights of the match can be viewed on the GarforthTown web site at  http://www.pitchero.com/clubs/garforthtown/videos/sunderland-rca-3-1-gar...