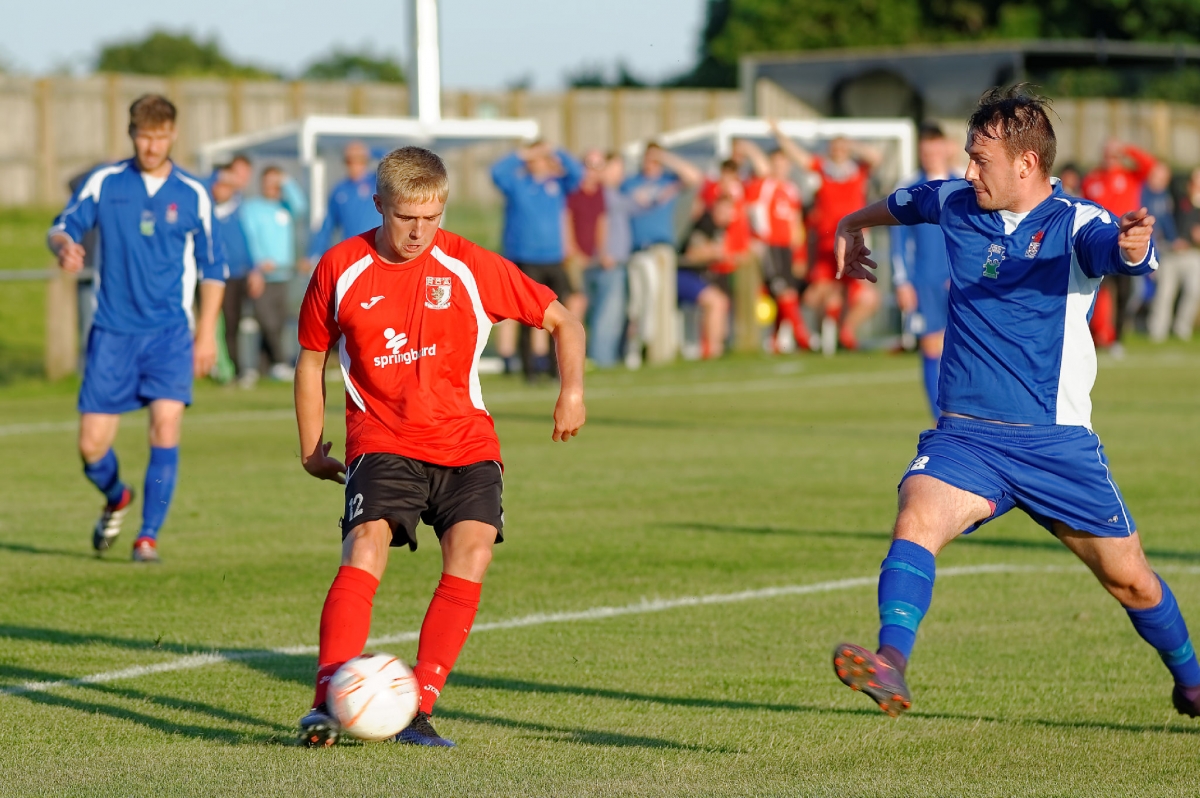 Recent signing Dylan Elliott whips in a cross during the second half of the match. Photograph: Simon Mears.

Just 48 hours after the excellent victory at home to Sunderland AFC under 23s, and Sunderland RCA were back in action with a friendly trip to newly-promoted Jarrow.

Jarrow are now just a few short weeks away from beginning their inaugural season in the Northern League, after winning the Wearside League last season with an impressive 91 points - winning 29 and losing just 5 of their 38 games.

The match began at a fast pace with Jarrow making a strong start. In the 10th minute a cross from the right was headed to the edge of the RCA penalty area by Hodgson and was volleyed back towards goal by Allan but was saved by Peccolo for a corner which was cleared. Four minutes later and RCA had their first effort on goal when a shot from Wilson from 25 yards cleared the crossbar. Five minutes later and a cross on the right from Charlton found Swansbury in the penalty area but his shot was blocked for a corner. From the corner Armstrong fired wide from the edge of the penalty area.

In the 25th minute McGuinness released Larkin down the left, who made a lovely run, driving into the penalty area before pulling the ball back to Mensah who fired over the crossbar. Four minutes later and Jarrow were unlucky not to open the scoring - Hirst picked up the ball on the right, looked up, and fired in a magnificent effort from all of 30 yards that crashed off the top of the crossbar.

A further four minutes on and Larkin made another run down the left, cutting in again, but his shot was tame and drifted wide of the post.

In the 36th minute RCA took the lead - Armstrong won the ball in midfield before exchanging passes with Wilson and advancing into the penalty area where he was tripped and a penalty awarded. Larkin stepped up to slot the ball home. At this point RCA were dominating the play and almost doubled their lead two minutes later. A corner kick was headed goalward by Mensah but was cleared off the line, chaos then ensued as first Swansbury and then Larkin both had follow-up efforts cleared off the line too as the Jarrow goal was peppered. In the final minute of the half Larkin had a shot from the edge off the penalty area that rebounded off the crossbar and Cassidy, following up, fired the rebound over.

Jarrow had played well for the first half hour, but RCA got to grips with the match and finished the half on top, creating numerous chances.

RCA got the second half off to a good start and almost doubled their lead in the 50th minute - Cassidy made a good run down the right and crossed to Larkin whose shot was superbly saved by Frater. The ball rebounded to Cassidy who let fly and produced an even better save from Frater, diving full length to his left to turn the ball around the post for a corner which was cleared.

In the 62nd minute RCA had another good chance as substitute Callen crossed from the right and Charlton rose to put a free header wide of the post. Three minutes later, Jarrow had a good chance to draw level as a cross from the right was stabbed narrowly wide by Allan stretching at the far post. And five minutes later Jarrow had their best chance of the half - a free-kick was awarded 25 yards from goal and Hirst curled the ball beautifully over the wall only to see Peccolo claw the ball around the post from an effort that looked destined for the top corner.

With seven minutes remaining, RCA sealed the match - substitute Stewart crossed from the right and Larkin controlled the ball at the far post before beating Frater with a shot that found the back of the net via the upright. In the final few minutes RCA managed further efforts - good play by Davis released Callen who fired in a ferocious effort that was beaten away by Frater. And Stewart and Larkin also had good chances with shots that cleared the crossbar from close range.

Plenty of positives for both sides to take from the match - for RCA, another win, a clean sheet and plenty of chances created. For Jarrow, a very good opening 30 minutes, some superb goalkeeping and still being in the game until the final seven minutes of the match against an established Division One side.

Best of luck to Jarrow in their first season in the Northern League.

Next up for RCA is our third friendly of the pre-season at Northern League Division Two side Willington this Saturday, 15 July, kick-off at 3pm.