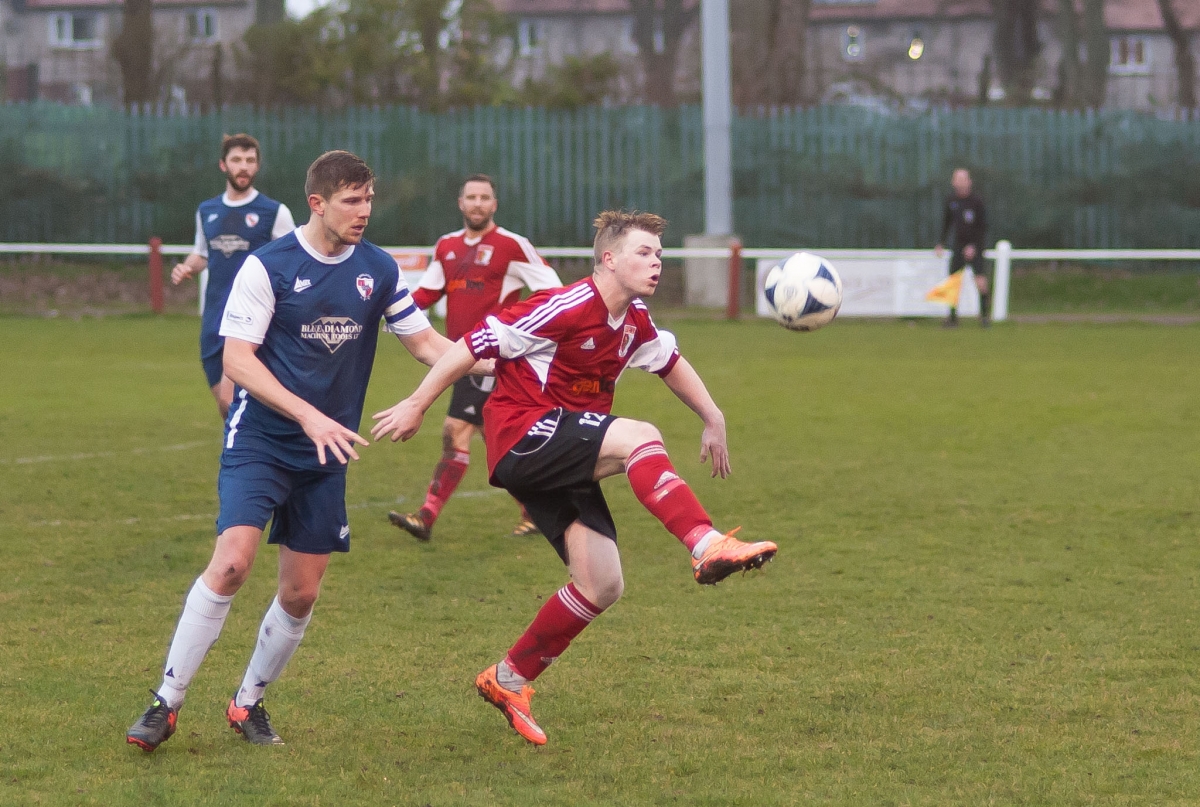 James Cassidy, scorer of RCA's first goal, in action during the match against Shildon.

Photos from Dennis Clegg are here.

Sunderland RCA welcomed Northern League champions Shildon to Meadow Park for what promised to be a highly competitive match. Shildon are currently sitting in third position in the table, hanging onto the coat-tails of North and South Shields as they bid to retain their title - an ambition which was dented by a surprise 2-1 defeat at Chester-le-Street in their most recent Northern League match.

The big talking point among RCA and Shildon fans alike was the news on Friday evening that Shildon’s long-serving management team of Gary Forrest and Stuart Niven had resigned from their positions - with Daniel ‘Bobby’ Moore taking over as manager.

RCA made six changes to the side that won so impressively at Whickham on Tuesday. Jonathan Carmichael returned in goal, Luke Richardson was in at right back, Greg Swansbury captained the side, Craig Hodgson and Mark Robinson returned in midfield, with John Butler up front.

In the 14th minute Callen was suffering with hamstring problems and was replaced by James Cassidy. Two minutes later and RCA launched their first meaningful attack when Butler made a run down the right and into the penalty area - strong appeals for a penalty followed as Butler went to ground but the referee gave a free-kick the other way. RCA were now getting a foothold in the match and equalised two minutes later. A long ball forward from McGuinness was flicked on to Cassidy who raced into the penalty area and fired in a shot that Jeffries got a hand to but couldn’t prevent hitting the net. It didn’t take long for Shildon to retake the lead and in the 21st minute some good play by Purewal released Greulich-Smith who finished smartly.

RCA equalised in the 35th minute as Larkin made a run down the right and crossed to Charlton who guided the ball beautifully past Jeffries and into the far corner. Two minutes later and RCA could, and probably should, have taken the lead as Charlton was put clean through by Larkin but his shot was well saved by Jeffries. RCA were now in the ascendancy and three minutes later Charlton won a strong challenge in the centre circle and the ball broke to Butler who was in on goal, rounded Jeffries and coolly slotted the ball home to give RCA the lead for the first time in the match.

A highly entertaining half with RCA recovering well from being 1-0 and 2-1 down to take a lead into the interval.

The second half got underway with RCA now kicking down the slope and in the 50th minute Larkin made a run down the right, crossing to Robinson whose shot from 20 yards was saved by Jeffries. Two minutes later and a lovely chip from Wing at the edge of the penalty area went just over the crossbar. On the hour Shildon substitute Rae shot just wide from a corner. One minute later Charlton released Butler whose shot was well saved by Jeffries.

With 20 minutes remaining, and Shildon pushing for an equaliser, Bell had a shot from close range that went just wide of the post. By this stage tempers on both sides were fraying and in the 75th minute Hodgson and Wing clashed for the second time in quick succession and were both booked. Two minutes later and a Shildon cross from the left was sliced over his own crossbar by Richardson for a corner which in turn was cleared off the line. One minute later and Shildon equalised when a corner into a crowded penalty area was turned in by an RCA player for what looked like an own goal.

As the match entered the last 10 minutes, Richardson won a header from a throw-in, Robinson picked up the ball and drove into the penalty area, leaving the ball to Charlton whose shot was blocked. Three minutes later the game swung to Shildon as Richardson tripped Rae in the area for an undoubted penalty - Bell stepped up to send Carmichael the wrong way and put the visitors in front for a third time. Shildon sealed the match three minutes from time as Rae capitalised on a mistake in the RCA defence.  And in stoppage time the capitulation was complete when a mishit clearance by Carmichael presented Wing with a tap in.

An unusual match to summarise - anyone looking purely at the scoreline could be fooled into thinking that this was a fairly comfortable win for Shildon. However, for nearly 80 minutes RCA more than matched the League champions and then, unfortunately, pressed the self-destruct button in the final minutes of the match. Shildon are, of course, a very good side who pass the ball quickly and confidently and were a constant threat but the goals were handed to them on a plate in the last 10 minutes.

In defeat there are so many positives for RCA to take from the last seven weeks: seven wins in a row, progress to the last 16 of the Vase, the Quarter Final of the League Cup, five clean sheets, too many goal scorers too list here and all done playing some lovely football.

Next up for RCA is a trip to Newport Pagnell Town in Buckinghamshire for the FA Vase Fifth Round on Saturday, January 28th, kick-off 3.00pm.