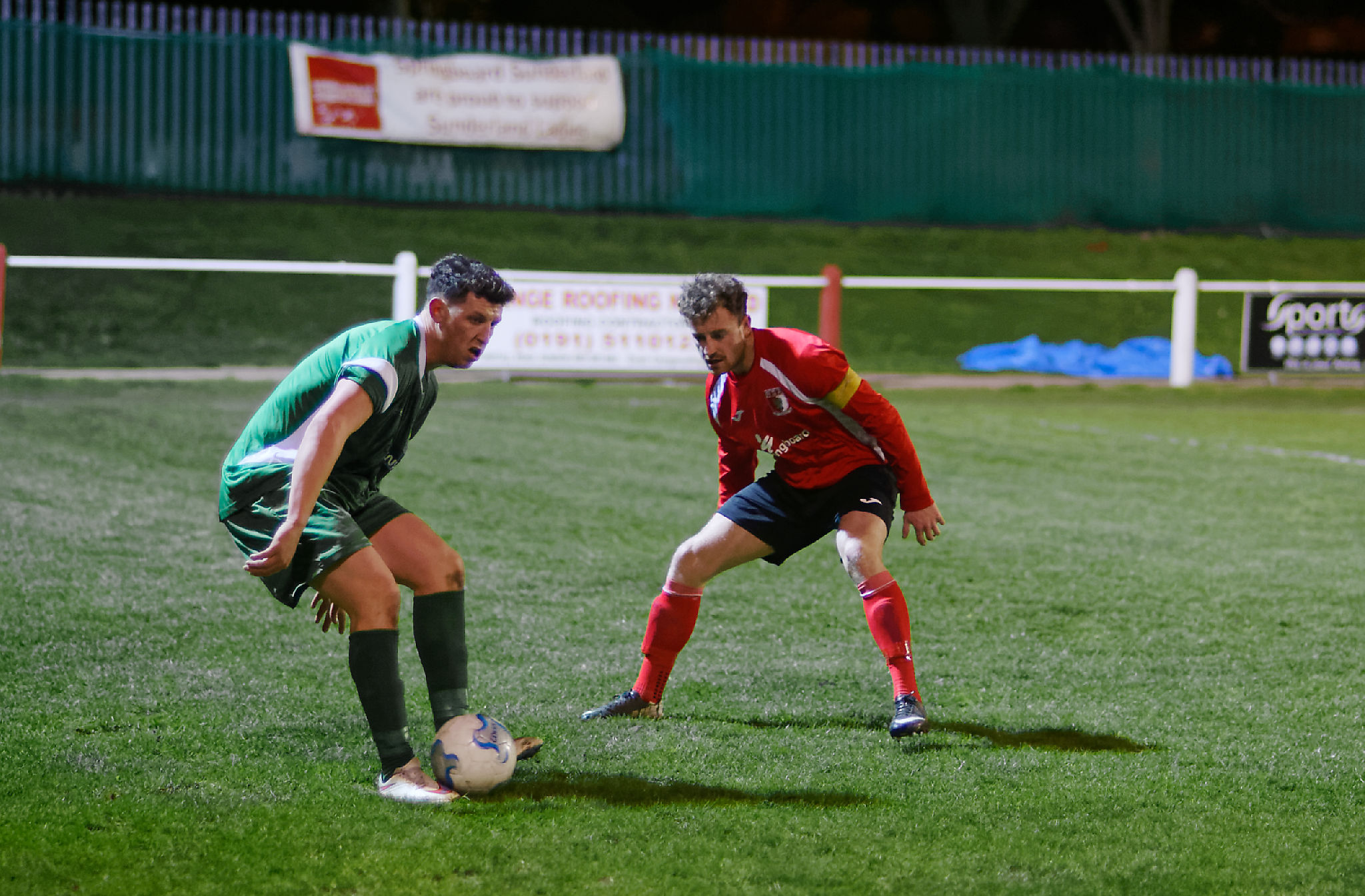 Sunderland RCA welcomed Newcastle Benfield to Meadow Park in a match where both managers would be looking for positive reactions from their players after some indifferent results in recent weeks. RCA have lost their last three matches and Benfield their last two.

The management team at RCA were forced to make changes with goalkeeper Andrew Hunter suffering a thigh injury which meant the return, sooner than expected, of Jordan Harkess after his lay off due to a broken jaw. Also in the starting eleven were new signings Jonathan Wightman and Shane Jennings who would replace Colin Larkin (work commitments) and Kevin Gordon respectively. Both players were on the bench alongside James Armstrong and James Cook who were returning from injury and Kieran Graham.

The teams took to the pitch on a cold but pleasant evening with RCA taking advantage of the slope in the first half. In the opening minutes Brayson showed why he is the league’s current highest scorer when he received the ball with his back to goal, turned and shot in one motion and Harkess in the RCA goal was pleased to see the first effort of the night go wide of the target.

Although RCA had the advantage of the slope it was the visitors who carved out the next opening, this time a quickly taken free kick was launched into the box by Baptiste and fell at the far post to Taylor who blazed wide of the target from three yards out.

RCA picked up the pace of their game and pushed forward looking to take advantage of the slope and forced Benfield on the defensive.

In the 15th minute RCA were awarded a Corner which was driven in by Noble towards Callen who rose well to power in a header which flew just over the bar.

Two minutes later and a surging run by Charlton was stopped by Slaughter at the expense of another corner. Again Noble swung in the kick this time it was flicked on by Hatch and fell to Brown who fired his shot well over the bar.

The pressure from RCA was constant and the threat of a goal was on the cards when Wightman dribbled past two defenders before seeing his shot saved by Grainger.

In the 27th minute RCA were awarded a free kick on the right. Noble’s flighted kick was headed away by Slaughter, but was picked up on the edge of the area by Jennings who clipped the ball back into the box for Hatch to head home from six yards out.

On the half hour it could so easily have been 2 - 0 when Wightman slipped his marker on the left wing before crossing into the box where Charlton could only direct his header wide of Grainger’s upright.

It was all RCA at this point as they looked to capitalise on their territorial advantage and in the 40th minute Wightman again cut inside two defenders before seeing his shot blocked by Taylor and the ball fell to Richardson who crossed into the path of Callen inside the six yard area, but he could only direct his shot onto the bar.

With the game entering injury time and against the run of play Benfield equalised, a long ball out of defence found Taylor who was being marshalled by Richardson, the ball took a slight bobble as the RCA defender made his tackle and he caught the player instead of the ball. A penalty awarded and Brayson, the league’s leading goal scorer, rarely misses from there and he slotted the ball past the despairing dive of Harkess.

An explosive start to the second half saw RCA pressing forward from the off and in the 47th minute they took the lead when Callen picked up the ball from Brown and crossed into the box and although the ball was cleared it fell to Davis who struck a tremendous drive into the bottom corner of the net.

Benfield responded and three minutes later were awarded a free kick on the right. Taylor struck a wicked free kick round the wall and it struck the post with Harkess struggling to get to it. The ball was cleared up field by Richardson.

The game moved up a gear as Benfield pushed forward down the slope and their attacks started to gather momentum, a poor clearance fell to danger man Brayson, who fired inches wide of the upright.

On the hour mark it took a great save from Harkess to prevent Brayson from scoring with a well struck free kick.

RCA were starting to make their presence felt as the second half wore on and a good move between Davis and Charlton moved the ball forward and when the ball was cut back it fell to Noble, but he struck his shot wide.

The game was moving from end to end now and Harkess had to be at his best again in the 75th minute when a snap shot from Brayson had him scrambling across his goal area to save at the second attempt.

As players tired so the managers brought on their respective substitutes and it was the RCA pairing of Larkin and Graham who combined on the right before a cross from Graham was met by Hatch, but his header went narrowly wide of the target. Minutes later RCA should have made the game safe when Callen drove forward past two defenders before cutting the ball back to Larkin six yards out and with an open goal the RCA striker lifted his effort over the bar.

RCA were to rue these missed opportunities as Benfield, probably feeling that this was their night, started to pour forward. Taylor almost equalised in the 89th minute when he struck a cross field shot which Scourgie missed by inches. Then in the third minute of added time RCA lost the ball near the opposition’s corner flag and the ball was sent forward to Brayson who laid it off to Taylor who evaded two challenges before blasting the ball home.

There was little time for any further play as the referee called an end to proceedings.

RCA’s lowest crowd of the season witnessed a very entertaining if frustrating evening of football. The result of this match will be looked at as two points lost, but at least we have stopped the cycle of defeats and we will need to regroup before Saturday’s match against a resurgent Bishop Auckland team.