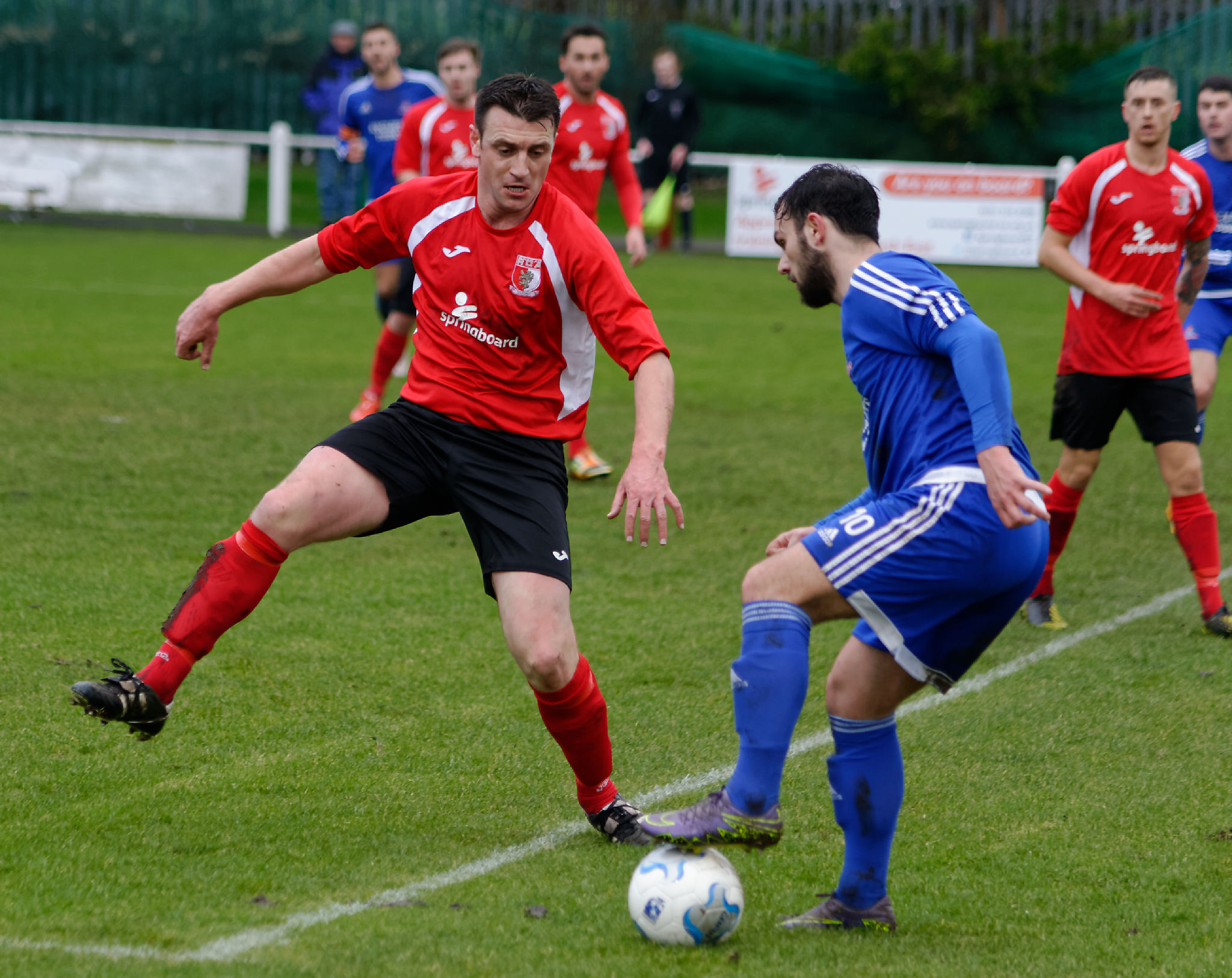 RCA returned to league action today after eight weeks of cup matches and postponements. Our last league match on 19th December 2015 was against West Allotment Celtic. Today, we welcomed a revitalised Newton Aycliffe team to Meadow Park, who, like ourselves, are undergoing a period of transition and are pushing for a top six finish to the season.

The management team at RCA made three changes to the team beaten by Whickham in the Durham Challenge Cup with Richardson replacing Cook, Hatch replacing Cresswell and Charlton returning in place of Hughes.

Tremendous work by the groundsmen to get the pitch in a playable condition was rewarded with an entertaining match, although the constant rain / snow during the game did little to help the underfoot conditions and the pitch started to cut up badly towards the end of the game.

RCA took advantage of the slope in the first half, but faced a stiff head wind which was unusually blowing off the North Sea.

It was the visitors who created the first opening of the game when Campbell took a short corner to Close who returned the ball to the striker, he clipped in a cross which was half cleared by Hatch, but fell to Mitton, but his shot flew high over the bar.

RCA moved forward with some purpose a minute later and an excellent move involving Charlton and Callen saw the ball played down the left to Richardson, his low cross into the box was met by Gordon, but he scuffed his shot and Winter was able to pick up the loose ball.

In the 11th minute RCA almost took the lead when Noble floated in a free kick to the far post where Buchanan managed to head the ball into the path of Larkin, but Mitton was able to get a block on the shot which was destined for the bottom corner.

The opening 20 minutes had seen RCA pushing forward in an attempt to get the opening goal with Aycliffe happy to hit on the counter attack. A long ball forward from Brown was chested into the path of Larkin who fired in a low snap shot which forced a good save from Winter.

The momentum of the game shifted now as Aycliffe started to find openings going forward and Moffatt and Campbell combined to force a corner on the left. The kick was swung in and Campbell got a head to it but Davis was on hand to scoop the ball away off the line. Back came Aycliffe, Close threading a lovely pass to Campbell, but his shot was well defended by Buchanan and the follow up shot from Banks was well wide of the target.

RCA, having withstood the pressure asserted by Aycliffe, responded with a decent effort when Larkin again was released by Charlton and his shot was well saved by Winter.

The half ended with a Knight free kick which flew over the bar without unduly troubling Hunter in the RCA goal.

The second half started and RCA were the first with a chance when Larkin allowed a throw in to drift into his right foot before volleying towards goal, but once again Winter was able to make an excellent save.

Aycliffe took the lead in the 49th minute when a Davis back pass bobbled on the uneven surface forcing a miskick by Hunter and Campbell, who rarely misses open goals, slotted into an empty net from 15 yards out.

RCA as always looked to get straight back into the game and a surging run by Gordon saw him play the ball to Charlton, he in turn slipped the ball into the channel for Callen and his pull back went just behind Larkin and he was unable to get a clean connection on the ball and sliced it wide of the goal.

In the 70th minute RCA equalised when Richardson intercepted a pass and played the ball forward to Charlton who sent an inch perfect pass to Larkin who outpaced the Aycliffe defence before curling a shot out of the reach of Winter and into the bottom corner of the net.

The celebrations were short lived as Aycliffe regained the advantage five minutes later when a ball forward from Mitton was deflected off Hatch and fell to Banks who fired in a wicked cross which Moffat dummied and the ball fell to Campbell who fired into the roof of the net. RCA brought on Graham to replace Gordon and the youngster, on loan from Sunderland AFC, almost made an impact with his first touch linking up with Davis before crossing toward Callen, but Winter was quickly off his line to punch clear.

The final ten minutes were end to end and both; teams had half chances without really troubling the keepers of the respective teams.

In the poor conditions these two well matched teams played out a good entertaining match which could have gone either way. From RCA’s point of view we have been really unlucky in the way we conceded the two goals, but once again we showed we can match teams at this level.

Next up is an away match at Morpeth on Wednesday, weather permitting.