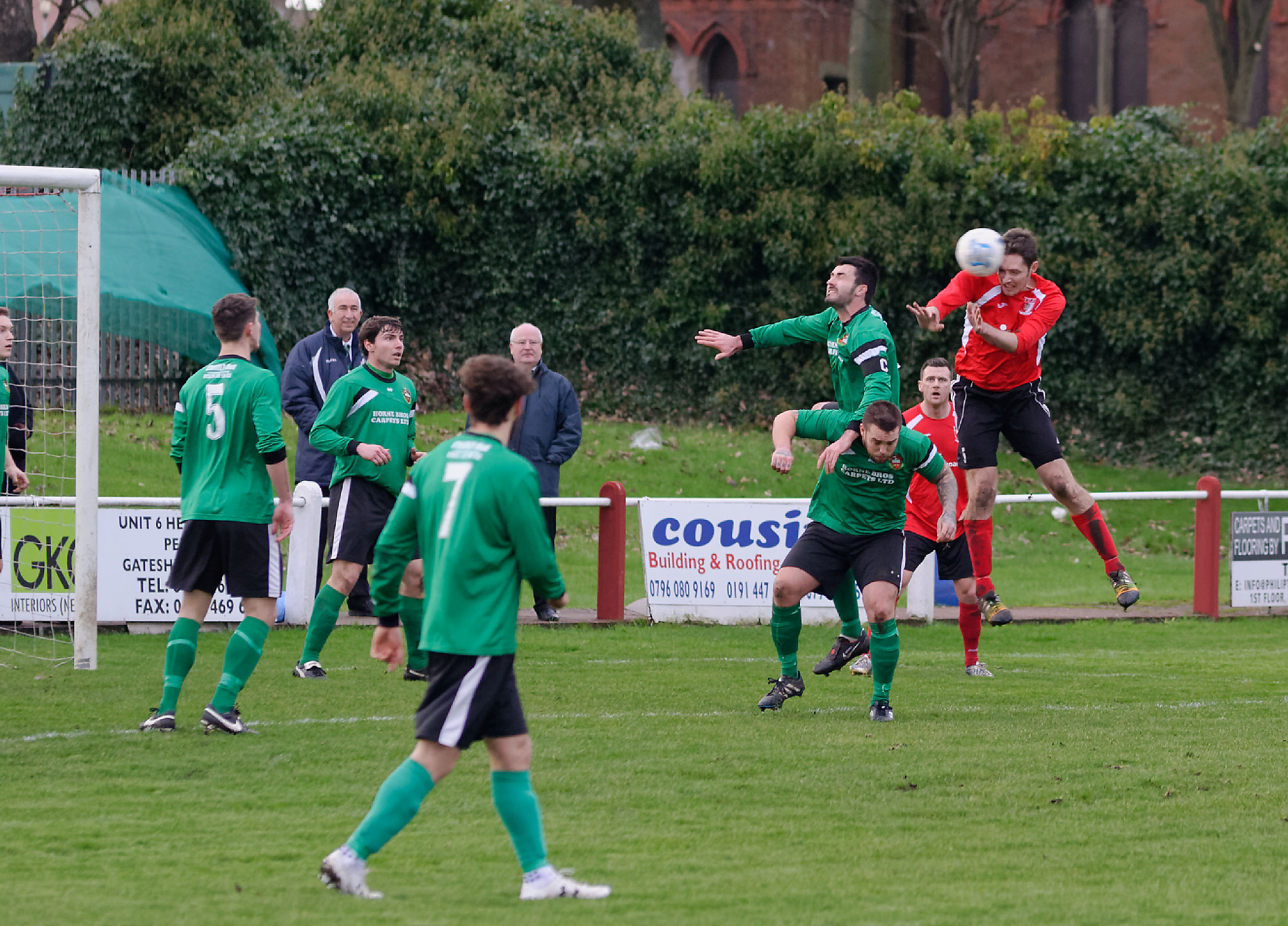 Please click here for North Shields FC TV's video of the match. Thanks very much lads - your work is much appreciated.

RCA were without Reece Noble through suspension so the management team brought in Lee Cresswell to replace him, there was also a place in the starting line up for Liam Hatch and the welcome return from injury of Stephen Callen.

Without a competitive game since 22 December 2015, the RCA management team had arranged a mid week friendly at Billingham Town, unfortunately this caused a selection problem for today when James Armstrong picked up a thigh injury and was ruled out of today’s important FA vase clash against Sleaford Town.

A special mention should once again go to the ground staff, who have worked wonders just to get the pitch in a playable condition.

Sleaford, like so many visitors to Meadow Park, took advantage of the slope in the first half. The opening minutes of the game saw both teams adapting to the underfoot conditions and it wasn’t until the fifth minute that RCA carved out the first chance of the game. Davis crossed into the box from the right, the ball was met by Callen who chested it into the path of Larkin, but the RCA striker fired wide of the target.

The visitors got their first chance in the 10th minute when a slick forward move saw Hockin feed the ball to Smith, he fired the ball toward the top corner but Hunter was able to turn it away for a corner. The resulting corner was played in by Hollingworth and although McNab headed clear the ball fell to Oliver whose first time shot hit the crossbar, the ball rebounded to Pemberton who headed home from inside the six yard area.

RCA where rocked by this setback and it took a while for them to regroup, when they did it was inspirational skipper Davis who drove them forward. A forward pass from Davis found Gordon on the right wing and although his cross into the box was cleared it only went as far as Callen who mishit his shot, but the loose ball was pounced upon by Charlton who rifled it into the roof of the net.

While the inquest was still going on in the Sleaford defence RCA launched another attack, this time down the left. A through ball from McNab found Proctor inside the area and it took a good block from Newman, at the expense of a corner, to prevent a dangerous cross. As it turned out the corner, taken by Proctor, resulted in RCA taking the lead when Hatch rose head and shoulders above the everyone else to power an unstoppable header past McGann in the Sleaford goal to make it 2 – 1 in the 27th minute.

RCA, buoyed by this spell of good football, looked to push home their advantage and almost increased their lead in the 35 minute when a long ball out of defence from Buchanan fell at the feet of Larkin who slide the ball across the face of the goal but both Callen and Charlton were unable to apply the finishing touch and the ball was eventually cleared.

A few minutes later an Hunter was again called into action when Hockin slipped his marker and played the ball to Oliver, the Sleaford forward, under pressure dropped the ball off to Pemberton who fired in a looping shot which almost deceived Hunter but he just managed to get a fingertip to the ball and divert it for a corner.

The half ended with RCA attacking again and Sleaford forced to concede a number of late corners which all came to nothing.

If RCA thought that they only had to turn up for the second half with the advantage of the slope, Sleaford had other ideas.

Although RCA pushed forward looking for the goal that would kill of the match it was Sleaford who almost opened the scoring when a long ball forward from Ward found Oliver in space. He burst forward into the penalty area and when Buchanan slipped he was left with only the keeper to beat however his shot was brilliantly saved by Hunter at the expense of a corner

In the 75th minute, RCA were guilty of over committing players and when the attack broke down Sleaford counter attacked at pace, a cross from Millard was mis-kicked by an RCA defender and the ball fell straight to Hockin who reacted quickly to stab the ball into the net for Sleaford’s equaliser.

This certainly wasn’t in the RCA script and they reacted in the only way that they know how and that is to attack, Charlton on the left almost conjured up the winning goal in the 80 minute when he cut inside, beat two defender bfore firing in a shot which McGann couldn’t hold and parried onto the head of Proctor but, from five yards out the RCA midfielder headed straight back at the keeper. The ball looked to cross the line, but neither the referee nor the assistant gave a goal.

With two minutes of normal time left on the clock a long ball forward from Fenton was headed clear by Buchanan, the ball fell to Charlton 35 yards out from goal and spotting McGann off his line he sent in an exquisite lob over the keeper and into the net.

Sleaford were not ready to lie down and pushed forward in an attempt to get something from the game. In the final minute of injury time, a foul on the halfway line by Gordon on Hockin resulted in a mass confrontation. Sleaford's Hone received a straight red card for kicking an opponent and Buchanan and Gordon both received yellow cards for their part in the fracas.

The resultant free-kick saw Sleaford send everyone including the goalkeeper forward but the ball floated harmlessly wide for a goal kick and the referee blew for full time.

While this was an entertaining game for the neutral and supporters, RCA were below par in this match, or are we expecting too much from our youngsters?

While Callen managed to get through 80 minutes on his comeback we once again picked up a number of injuries with Hatch limping out with an ankle injury, Davis suffering with a knee problem and Larkin with a 12” cut down his right calf.

RCA will now face Bristol Manor Farm in the Fifth Round of the FA Vase this Saturday, 30th January, at Meadow Park, 3pm kickoff.

Russell Wynn of North Shields TV covered the game and has made footage available at https://www.youtube.com/watch?v=52kgrd-Ibck&feature=youtu.be